Share All sharing options for: Game 6: Hornets vs. Sixers 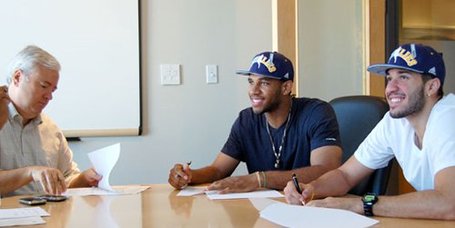 The Commish has seen Marco Belinelli deputize rather horrifically for him for the past few games; will he make his home regular season debut tonight?

Over at the official Hornets site, Jim Eichenhofer says Gordon is "questionable" for the game. What does this mean? Who knows!

Trevor Ariza is officially out though, courtesy of a strained right groin.

And now for a quick Q&A with noted burrito enthusiast Mike Levin of Liberty Ballers:

The Sixers have a young core that seems like, barring apocalypse or Willie Green, they will improve together. Jrue Holiday hasn't shown it yet, but he may be the best basketball player of all time, or at least a second tier point guard just behind the likes of Deron Williams and David Stern's plaything, Chris Paul. Evan Turner has already been better than last season after working with a shooting coach in the offseason to improve his awkward jumper. Iguodala and Hawes have been shooting out of their minds and, as much as it makes my eyes twinkle watching it, there's no chance it holds up. Lou Williams shoots a lot and I try not to stab myself in the face. Doug Collins is a nice fellow. The owners seem super pumped.

Well, what's the point? Without a complete stud scorer, this team will never get past the second round and mediocrity doesn't breed winners, it just sets you back 5 years. An inability to pull the trigger on an Iguodala trade and Elton Brand's amnesty keeps them just good enough to make the playoffs and avoid a good lottery pick in a sick wit it draft. Though a Clipper-esque losing atmosphere could condemn the team for a while, there's no doubt in my mind that a fire sale of everyone not named Jrue and Evan (there are only two players on the team with those names) and going 0-66 this season would be more beneficial for the franchise than the impending 6 seed. Woe is me, at least everyone can speculate about how much this team needs Lou Williams and his 28% usage rate.