David West Thought He Would Retire a Hornet

In so many ways, the Pacers were the natural fit for West. They needed him, and he needed them. It was time to leave New Orleans, a franchise without ownership, without direction. He loved coach Monty Williams and wished Williams had come into his life sooner, but former owner George Shinn doomed that franchise to years as a lost vessel. West and Chris Paul came within a victory of the Western Conference finals in 2008, and West now says flatly, “I thought we were going to retire there together.”

Yet, Shinn owned an NBA team for the phony public bible-thumping and rotary-club adulation, not a deep-seeded desire to chase championships.

“For a couple years, the direction was about winning,” West said. “And then all of a sudden it became cutting corners, saving money. …With no one at the top, you have no direction.”

The league is an initiative of the Mayor’s "Saving Our Sons" campaign, which draws support from the business, faith-based and nonprofit communities in an effort to curb violent crime and murder in the city.

"The Hornets committed to restarting a midnight basketball program in the city," reads a news release from the Mayor's Office.

Jarrett Jack Steps Up as a Leader

As a part of the second unit for the New Orleans Hornets last year, Jarrett Jack and Jason Smith spent ample time playing together, and getting used to the other’s games and movement on the court.

"I’ve always tried to be a leader," Jack said. "That part comes easy for me."

Jack’s game was full, playing 40 minutes, scoring 27 points and handing out 11 assists, both game highs. With some apologies, Jack’s statistics looked Chris Paul-like. He got into the lane and scored with ease. He set his teammates up for open looks. He played much better than he did on Sunday night in a 96-80 loss, when he went 3-11 from the field, scored just six points and had a season-high eight turnovers.

New Orleans head coach Monty Williams challenged Jack to be a better player against the Jazz. He clearly responded in a positive way.

"Obviously I wanted to come out and have a more positive effect on the game than I did last game," Jack said. "But it still wasn’t enough. You just have to go home and be ready. You can play well, but in the end you have to get the wins."

He talks to Paul regularly, about more than basketball, and labels their friendship as "all love."

Beast of the Night: Jarrett Jack posted 27 points, five rebounds, 11 assists, a steal, two blocks and a three-pointer last night against the Jazz. He shot 65 percent (11-17) from the field, 100 percent (4-4) from the free-throw line and had two turnovers. This was a nice bounce-back game after putting up mediocre lines in his previous two games. Jack remains a strong fantasy starter in most leagues, as he’ll rack up plenty of minutes and numbers for the Hornets this season.

Hornets Get Tuesday Off 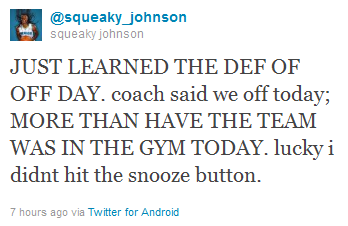