Share All sharing options for: Hornets played the Grizzlies

Yeah, it was a good game. Came close to beating them in the 4th but didn't. Rohan will put up a real recap [see bottom of this post - R], but I'll add some pics with some snarky comments cause that's how I roll (and I'm really tired)

The team was together 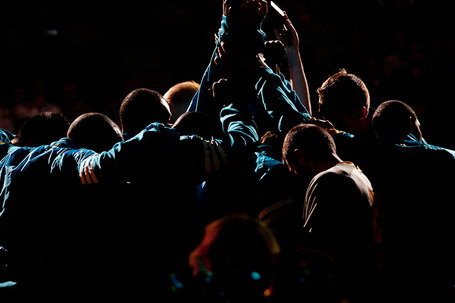 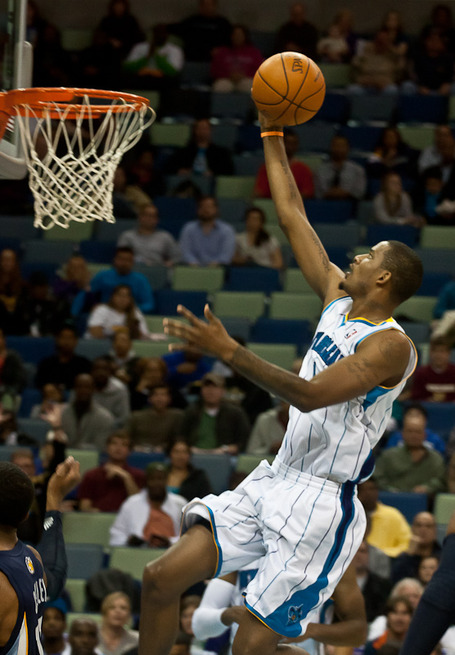 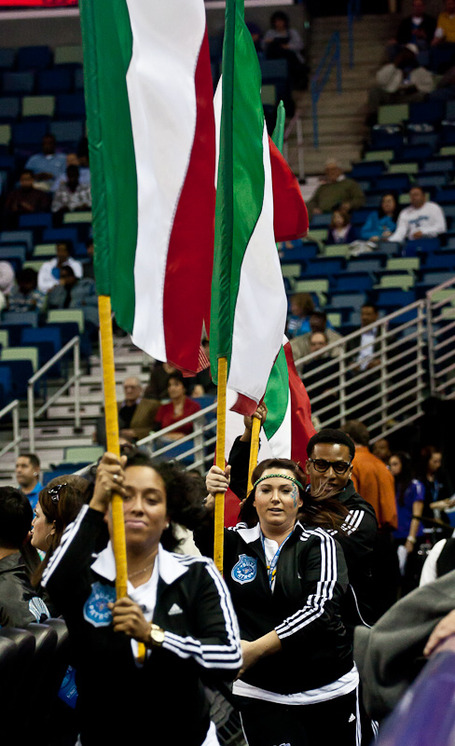 Gustavo Ayon played 13 minutes and looked good despite not putting up many stats (for the record, I believe I'm the first person in all of Yahoo that added him to his fantasy team. true story!) 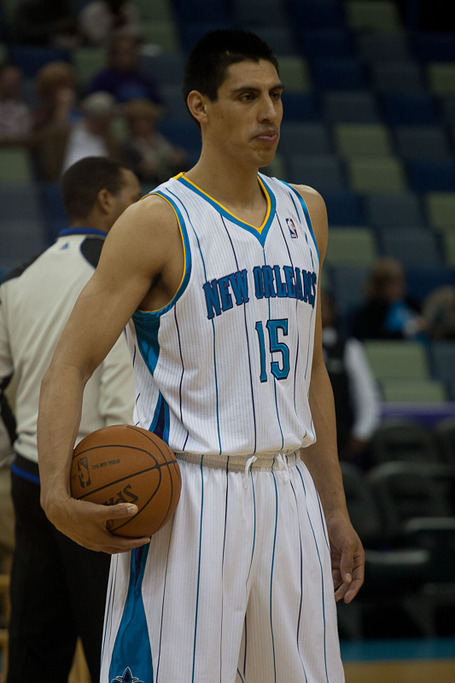 He looks like Jason Biggs in this photo. Strange.

Hornets tied it up in the 4th and then turned it over so many times, the fans were getting more stats than the players. Memphis won. Many beers were drank (and one poor fan had Marc Gasol land on them).

The end. See you in the morning.

Don't have enough time for a full recap, so I'll just tack some thoughts on here in addition to Matt's photos.

- As much as we've been critical of Jarrett Jack being too much of a one-dimensional scorer and not looking for others enough, I actually thought the opposite was true tonight. In the fourth quarter especially, Jack was feeling it, but he passed up open (range) looks on three different occasions to swing the ball to Trevor Ariza or Marco Belinelli. I dig the unselfishness, especially on Ariza's return to the starting lineup, but when you connect on 11 of 15 looks, you're well within your rights to keep firing away.

- Before his injury, we saw a "new" Ariza offensively - one that slashed, cut, and took to the rim aggressively. Early signs on his return are that that may yet be the Ariza we get for the rest of the season. If you can look past his 5 turnover line, Ariza scored 18 points on 13 shots with 5 rebounds, 4 steals, and 7 (!) assists. The transition certainly helped, but if Ariza can be a positive offensive player (like he once was!) in addition to his defense, I'm not going to know what to do with myself.

- Disappointed that Monty Williams went with Jason Smith over Gustavo Ayon in the closing minutes. It was costly. Smith fumbled away a huge rebound at the 50 second mark, one that allowed Memphis an extra play with which they salted away the game. Ayon took just two shots in 13 minutes.

- Speaking of Ayon, I also really loved the European soccer style "ole" chant the Arena did for him. I heard it most prominently during his jump ball in the fourth quarter (which he won but Ariza couldn't control), but I'm sure Matt/Will/others can point out if it was used in other places as well.

- It was another very quiet night from Greivis Vasquez, something that's becoming more and more common of late. I'm not too worried yet (3 of his 5 missed shots were blocked), but he's certainly lost a little bit of the edge and aggression he showed in his first few games of the season.

- Just an awful, awful night for Emeka Okafor. The guy's been working hard on the glass and has been our best defender on the season, so I'm more than willing to simply let this one slide. Bad games - they happen. He'll have his hands full next time out though with Houston's Sam Dalembert, who has been staggeringly effective in the young season (127 offensive efficiency, or 25 points higher than league average).

- Nice to see the three point shot vaguely make a comeback (5-12) although it was basically all Jack's doing (4-4). This was such a close game that none of the traditional four factors that account for winning (floor percentage, rebounding rate, turnover rate, free throw rate) singlehandedly put Memphis over the top. Rather, the Grizzlies marginally outperformed us in all four areas. It was a decidedly slow game too at 84 possessions.