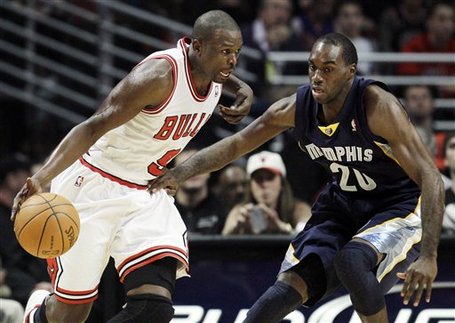 You have to feel for Memphis.

Last year, they came within a game of the Western Conference Finals, missing arguably their second best offensive player, and looked poised to make another deep run in 2012, amidst a Western Conference in transition. Maybe a run to the 2012 Finals was always beyond their reach, but given the current state of the conference (OKC's defense making them vulnerable), who knows?

Instead, the Grizzlies have been struck down by injury. Zach Randolph led the NBA in offensive rebounding in 2010-2011 and posted 115 offensive efficiency on 25% usage (read: outstanding). Now, he's out two months with a torn knee ligament. Behind him, Darrell Arthur was one of the league's most productive front court players. He's out for the season.

In response, Memphis moved for Marreese Speights from Philly (moving Xavier Henry to New Orleans) and Quincy Pondexter from New Orleans (in exchange for Greivis Vasquez), but, clearly, neither of those guys will come close to filling the hole left by Randolph and Arthur. Memphis has gone from a fringe Western contender to something decidedly worse. Their team offense has been dreadful; at 98.0 points/100 possessions, they're 26th in the NBA, right ahead of the 27th ranked Hornets (97.9 pts/100 poss). Their big problem, much like ours, has been effective shot creation as Memphis ranks in the bottom half of the league in both eFG% and FT/FG.

- Your opposing team blog for the evening is Straight Outta Vancouver.

- No new word on who will be starting at the 3 for us, though, on the basis of Dajuan Summers' performance and Al-Farouq Aminu's lack of minutes last night, I'd lean Summers again.