Share All sharing options for: Wolves 87, Hornets 80: "Whether we win or lose, we’re closer to a lottery pick^^"

That, from MZURK in the game thread, captured this game pretty accurately. New Orleans moves to 3-8, a bottom five team in the NBA and Minnesota to 4-7, just escaping that zone.

But while neither outcome was terribly objectionable from a 2012 Draft standpoint, there was also plenty to be excited about tonight. Gustavo Ayon put in a rather impressive stint off the bench. Dajuan Summers justified Monty Williams' decision to start him. Emeka Okafor had one of his finest games of the year.

In the end, the Hornets' front court outside of Okafor was the team's offensive undoing. Chris Kaman played 17 minutes, missing all 10 of his shots from the floor, while Carl Landry missed 7 of his 8 shots off the bench. And neither guy (nor Summers or Okafor) could do much about Kevin Love - 34 points on 17 shots, along with 15 rebounds. Score 80 points in a 90 possession game, and an individual performance like that will sink you every time.

Some more thoughts after the jump.

- I didn't particularly agree with Monty Williams' decision to start Summers over Aminu. Sure Summers is 24 (next week), but Aminu's the more viable long term prospect, and getting him as many minutes as possible would seem to make sense. But for the second straight night, Summers outplayed him and justified the decision. He was active on offense and defense and almost surely earned himself a second straight start against Memphis tomorrow.

- Marco Belinelli broke out of his slump right as we start to hear rumors of Xavier Henry making his debut. Just speaking potential, Henry figures to replicate the majority of Marco's talents (outside shot, movement off the ball, occasional takes to the rim) while also being a much, much better defender. It's way too early right now, especially given Henry's health, but Marco may need to keep having games like this to solidify his job. Monty wasn't hesitant at all to give Trey Johnson minutes during Belinelli's slump, and I can't imagine he'd refrain from doing the same for a healthy Xavier Henry.

- A rough return from Jason Smith - shot poorly, got burned a few times defensively, but on the plus side, provided us with an amazing Duncan-face.

- The conservation of point guard performance continued tonight - Jarrett Jack did a good job creating for teammates (9 assists to 3 turnovers) while Greivis Vasquez finished with 0 assists and forced multiple shots (missed 5 of 6).

- The NBA league average figure for free throws/field goal is 0.215 (or, in other words, about 1 free throw for every five field goal attempts). The Hornets ceded a 0.471 figure to Minnesota, essentially costing themselves the game. Kevin Love was the big culprit obviously (17-18), but New Orleans committed all manner of dumb fouls away from him as well, putting the Wolves into the bonus with ridiculous ease. The Hornets own FT/FG? 0.177.

The Hornets held a slight edge on the glass and played the Wolves to a draw both in shooting and turnovers. The free throw line cost them the game.

- UPDATE: From 247_Hornet in the gamethread: 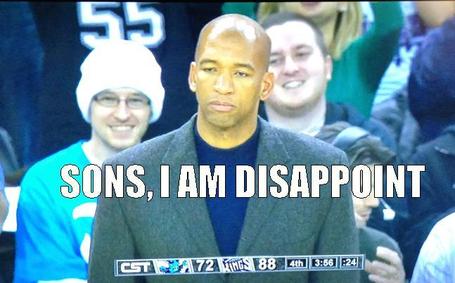 - And last but not least, Complex Mag has named us the best Hornets blog! So thanks for reading, everybody; this site wouldn't exist without y'all.