Share All sharing options for: Game 11: Hornets vs. Wolves 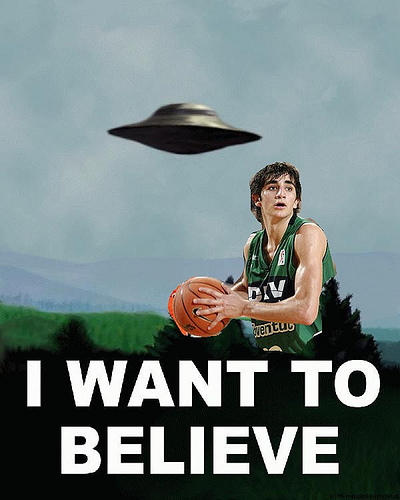 via the excellent Canis Hoopus

We own their unprotected draft pick. Any discussion of the 2011-2012 Wolves will start and end with this, for good reason.

The Wolves are an interesting enough team though, far better than the Clippers had them pegged at during the initial Chris Paul trade negotiations. Kevin Love's ridiculous rebounding numbers from a year ago may be a tad down, but he's also become much more involved in the offense, upping his usage rate from 22.9% to 27.1%. There has been a corresponding drop in efficiency (123 to 114), but his 3P% has stayed constant, and his free throw rate has increased a good bit as well. Basically, this guy needs to be an All-Star.

Then there's the Rubio factor. He can hit the three when he's set (8 for 17 thus far), he's a crafty finisher around the basket, and he's as good a passer as we've seen in a ... while. For now, he comes off the bench though that could change soon.

All the talent aside (I'm a fan of Derrick Williams as well), the fundamental problem for Minnesota is the sheer number of minutes and possessions they give to bad players. Wes Johnson starts at the 3 and produces 75 points/100 possessions (yes, SEVENTY-FIVE. About 30 points less than league average). Wayne Ellington, who starts tonight, shot 40% from the field last year and is shooting 33% this year. And the man whose injury allows Ellington into the lineup, Michael Beasley, isn't very good either - he had a 100 ORtg last year (bad) and is down to 80 this season (very bad). And this is all to make no mention of the Serbian Gangster.

Minnesota will be better (and already has been better) in 2011-2012 because they replaced the worst coach in the league with a very decent one, Love is awesome, and Rubio makes everyone on the floor better. But they still have a strong shot at the lottery because of those multiple troublesome, non-productive positions.

- Your opposing team blog for the evening is Canis Hoopus.