Share All sharing options for: Game 10: Hornets vs. Thunder 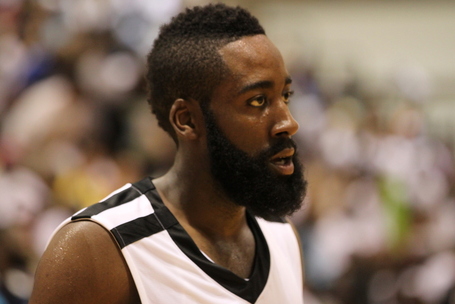 From 2008-2011, the Thunder were the league's feel good story, regardless of the end of season result (if you could get past the whole "stolen from Seattle" aspect of things). They were "how to build a team the right way," "how to succeed in a small market," as of last year, the "anti-HEAT," and similar assorted cliches.

But three years on, the flip has been switched. This is, on paper, the best team in the Conference, and falling short of the 2012 Finals will fully open a can of worms their detractors have been prying at for months now. Can Russell Westbrook and Kevin Durant coexist? Can James Harden achieve his full potential as a third wheel? And what of the Thunder's repeated lip service to "wanting to win with defense" and their subsequent (and equally repeated) failures to even moderately approximate good defense?

For now, the Thunder are 9-2, the West's team by record. Beneath the surface though, lie some troubling details.

After finishing as a league average defensive unit in 2011, the Thunder are currently ranked 23rd in defensive efficiency. While they actually do a reasonable enough job at limiting opponent floor percentages, they rank dead last in forcing turnovers, in the bottom half of the league in defensive rebounding and committing fouls. With a defense like this, they can almost forget about competing with a Chicago or Miami in the Finals; something has to change.

Referring back to the +6 scale, as it currently stands, OKC is a +3.9 team (+6.8 offensively and -2.9 defensively). It's still early, and they'll almost certainly get better as we get further into the season. But the problems that could eventually go on to cost the Thunder a shot at winning the West are already readily apparent.

James Harden has started 1 game this season. As things currently stand, James Harden should be a Western Conference All-Star.

He's my runaway favorite for Most Improved Player this year (and, obviously, 6th Man). Check out his numbers this year compared to last:

Putting those things together, and this is the kicker, his offensive efficiency (ORtg) this year is 131.

To put that in perspective, let me write this next sentence in bold:

James Harden currently has the highest offensive efficiency for any player with a usage rate over 16% in the history of basketball.

Yes, it's only 11 games in. Yes, he'll regress. But James Harden has been absolutely tremendous.

- Your opposing team blog for the evening is Welcome to Loud City.