Good afternoon, @tHers. Following that quiet stretch last week, the stories are starting to flow, and Bleacher Report is once more filled with tales of Chris Paul's eventual exit to New York. Hooray.

Jump for some links.

- We learned last week that NBA 2k12 will include the 1992-1993 Charlotte Hornets; this week, news has emerged as to the ridiculous depth of classic rosters the game will contain. Additionally, 2K has released the full Hornets roster:

What's left to say about Michael that hasn't been said already?  His entire career was laid out before your eyes in NBA 2K11, including the major games that ultimately shaped his legacy.  In ‘NBA's Greatest', we are going to honor MJ by pitting him against one of the most exciting and energetic teams of the early 90s, the 1992-93 Charlotte Hornets, led by none other than Larry Johnson, Alonzo Mourning, and Muggsy Bogues.

- While we're on the subject of classic Hornets, check out this (via J.E. Skeets) old school Charlotte Hornets logo from 1988-1989 at Uniwatch: 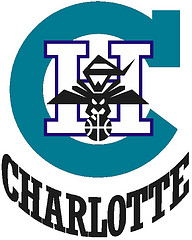 During the NBA season, one of the most familiar New Orleans faces you often see seated courtside at Hornets games is Sean Payton, head coach for the Super Bowl XLIV champion Saints. On Thursday, Aug. 18, it was time for the Hornets' sideline leader, Monty Williams, to return the favor and pay a visit to Payton's workplace.

<snip> "It's important for us to continue to learn and get better as coaches," explained Williams of the trip. "I want to come over and learn as much as I can from guys who do it well."

<snip> Payton joked that he knew the Hornets had arrived at practice when he looked over and saw a pair of 6-foot-7 men standing on the sideline, including Williams. The two coaches of New Orleans' major-league professional sports franchises had a brief conversation, before it was time for Payton to return to the task of getting the Saints prepared for their Sept. 8 prime-time regular season opener at Green Bay's Lambeau Field. As Payton later spoke to a large media contingent, he wore a brand-new, white and Creole blue Hornets hat.

- Malcolm Gladwell wrote for ESPN yesterday that owners shouldn't expect to turn profits off NBA teams. Check out both Andrew's and Mason's takes on the issue at Hoopdat.

Tom Ziller has a rebuttal to Gladwell's piece at SBNation.com as well.

- The latest Hornets Beat is up at Hornets247, with Mike from HornetsHype, our own Will, and a couple HornetsReport contributors all participating.

- Last but not least, the flurry of activity at Swarm and Sting is very much appreciated. Jake Madison explains why Carl Landry to Portland makes minimal sense, and James Grayson opines that winning contributes to "brand value," more than any other factor.

Have a good Tuesday y'all.