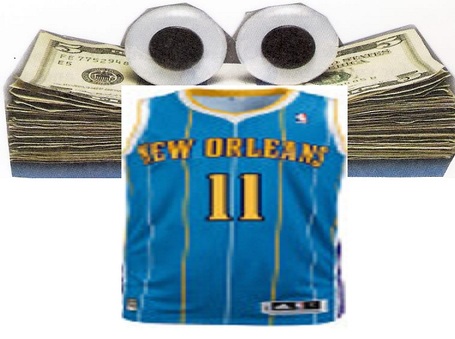 Please join me in welcoming Financial Considerations to the Hornets family. I'm sure he will be a valuable member of the team in the important season to come. Spread the excitement and remember to tell your friends to buy tickets!

*Sarcasm over* The Hornets traded sold the 45th pick (and their only pick) in the draft to the New York Knicks (reportedly for $750,000). My opinion is that this wasn't a big deal and they were unlikely to find an impact player at this point in the draft, but this move sends a TERRIBLE message (intentional or not) to fans at a time when the organization is harping on generating fan support through current ticket holders. 2nd round contracts are not guaranteed and this move will do next to nothing in terms of making cap space. The team could have even drafted a long term International prospect (as many other teams did) and spent zero dollars on salary this year. As I said before, this is not a huge deal, and will likely have no impact on the court. Dell Demps could turn around and execute a series of offseason moves that have the fanbase salivating for the start of the season. However, in an extremely important summer for the franchise, this draft is at best mildly disappointing, and at worst is a disconcerting reminder of the penny-pinching ways of the former regime.