This post might rub some people the wrong way. I can understand why. Here we are, finally at the end of a long and emotionally draining season. The Hornets fought hard  in the first round of the playoffs despite being severely outmatched and without David West, and gave us two of the more memorable performances in Hornets history. What am I doing talking about Marcus Thornton at a time like this?

Sorry, I’ve got to speak my peace. If you are tired of the Thornton discussion, feel free to skip this article and the discussion that may very well ensue. With that out of the way, let’s get started. Back in December, in one of my earliest articles for At the Hive, I wrote this:

In an interview with SLAM a few weeks back Monty Williams said that he believes most players will improve when they are given consistent minutes. For whatever reason, he isn't applying this philosophy to Marcus. It's going to really suck when Marcus drops 35 on the Hornets in a few years wearing a Nets uniform or something.

I was frustrated, obviously, but at the time I was still fairly optimistic that Monty would change his tactics with Marcus and let the kid play. Of course, that didn’t happen, and Marcus is now sporting a Kings jersey., As it turns out, Marcus dropping points on the Hornets wasn’t as painful as I thought it would be. Marcus played well, but the Hornets won that March 12th meeting, and it was an exciting and entertaining game. Chris Paul looked like the Chris Paul we’ve all come to know and love. New arrival Carl Landry had his first 20 point game as a Hornet. It was the kind of win that made me feel good to be a Hornets fan and a Marcus Thornton fan at the same time. At least for that night I found it easy to forget Monty’s mishandling of Marcus Thornton. However, I couldn’t forget it for too long, and its that mishandling that I want to talk about.

Monty Williams had, on the whole, a successful and impressive season as a rookie head coach. He instilled a commitment to defense in the team, and as a result the Hornets challenged for the title of the Western Conference’s best defense all season long, only losing that spot after a series of injuries to Emeka Okafor, Trevor Ariza and David West. Despite up and down play from Chris Paul, and despite the injuries to important players, Monty Williams kept the team well above .500 and guided the team to the playoffs. It should also be noted that he did this despite having stepped into a rather turbulent situation. By that I mean the rash of Chris Paul trade speculation over the summer and the ongoing search for an owner. That’s all commendable, and Monty Williams (and his staff) deserve a great deal of credit for those accomplishments.

That being said, I firmly believe Monty Williams made a serious misjudgment in regards to Marcus Thornton. As a Sacramento King, our boy Buckets averaged 20.1 points, 4.4 rebounds, 3.2 assists, 1.6 steals and just 2.0 turnovers per 36 minutes. Per game he averaged just a hair over 21 points. He did this on solid percentages of 45.0% from the field, 36.1% from three and 80.5% from the line. His ratio of points to field goal attempts stands at a solid 1.21. According to Dean Oliver’s Offensive Rating, Thornton generated approximately 112 points per 100 possessions for the Kings, which is more than anyone not named Chris Paul or (coincidentally) Carl Landry generated for the Hornets. His PER shot from 14.0 as a Hornet up to 18.2 as a King, and he was one of only two Kings with a PER higher than the league average of 15.0. As a King, Marcus Thornton was generally the best player on the floor. 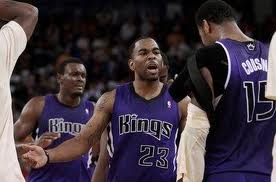 Is any of that surprising? No, not in the least. Over the course of 73 games last season, Marcus Thornton averaged over 20 points per 36 minutes, posted a PER of 17.4 and an Offensive Rating of 111. Those of us who watched him play every game saw what kind of scorer and shooter he was as well as the kind of player he might one day be. The fact that Thornton not only returned to form as a King but also showed improvement is not an unexpected outcome. Given the playing time, we all knew he could do just that.

"So what?" you might say. You might think that the trade for Carl Landry was a good one, that Landry played well and acted as an efficient and reliable scorer, and that his production was vitally important due to David West’s absence. I wouldn’t disagree with any of that. In fact, those are my exact thoughts. However, does any of this change the fact that Monty Williams made a mistake with Marcus? I certainly don’t think so. No one could have predicted whether or not David West would suffer a season-ending injury, so the fact that Carl Landry ended up filling a vital role has no bearing on whether or not Marcus Thornton should have been a played a larger and more consistent role for the Hornets. Besides, it’s conceivable that had Thornton succeeded in New Orleans this season, the Hornets might have gotten more than Carl Landry back in a trade for him.

Of course, you might very well have other objections. For instance, perhaps Thornton simply excelled because he played on a bad team, which you might think is in line with what he did last season. Or perhaps Thornton excelled because he was playing in a system where he could excel. I don’t think the first objection holds any weight. There’s simply not much evidence that playing on a bad team can pump up a player’s most important statistics. For certain, the most capable offensive player on a bad team may very well get more minutes, more shot attempts and more time with the ball than he might on a more talented team. As a result, the player might see an increase in statistics like points per game or assists per game. By the same token, however, the player may very well turn the ball over more and score less efficiently. If this happened with Marcus, one might have a case with that first objection. But this is not what we saw from Marcus. Marcus’ stats increased in both volume and efficiency.

The second objection, on the other hand, deserves some consideration. At 95.1 possessions per game, Paul Westphal’s Kings were one of the fastest playing teams in the league this season. I think most will agree that Marcus’ playing style suits a fast-paced offense well, and New Orleans under Monty Williams has been anything but fast. That being said, the 2009-2010 Hornets, though they played faster than the Hornets under either Byron Scott or Monty Williams, were simply average in terms of pace at 92.6 possessions per game. Of course, if you want to make the case that league average is practically Nellieball compared to the Monty Williams-led Hornets, I’d probably agree.

Yet I have a hard time believing that a player as skilled and as talented as Marcus can only excel under certain conditions. It’s not as if Marcus only scores in transition. I wish I had the situational statistics to back this up, but to my eyes Marcus has always been excellent off of cuts and screens, and he’s one of those (seemingly rare) players who displays excellent off the ball movement and constant activity. These facets of his game can work well no matter the speed of play. Besides, I believe it’s a coach’s responsibility to utilize a player’s strengths as best as he or she can. That, ultimately, is my complaint against Monty Williams. Rather than find a way to use Marcus effectively, Williams instead chose to restrict Marcus’ involvement. Williams used Marcus erratically and inconsistently. One day it was garbage minutes, the next day it was a DNP-CD, and the next day Marcus was being relied upon for crucial minutes down the stretch in a tight game. Then it was another DNP-CD. I think it’s unrealistic, and perhaps foolish, to expect a player to perform consistently when he’s being given minutes in such an inconsistent manner.  Monty Williams could have instructed the second unit to push the ball more, and used Marcus as the featured scorer of this unit. Or he could have attempted to design creative plays that utilized Marcus’ long-range shooting abilities and Chris Paul’s deft ability to find open three-point shooters. Perhaps he did. There’s a lot we can’t know about the relationship between player and coach and Monty’s coaching of Marcus. However, anything Monty did or did not try would have had to be supported by consistent playing time, and this was never the case.

A capable, efficient and wildly exciting scorer, a hugely adored hometown favorite, possibly even a future all-star. That’s Marcus Thornton. I hope one day he’ll be a Hornet again. I do believe every rookie head coach should be allowed a large helping of mistakes, but I can’t help but feel that this particular mistake was an awfully big one. But what’s done is done. In the comments, I expect raucous support, vehement disagreement and a fair smattering of insults and questions about the legitimacy of my fanhood. I’ll be disappointed in anything less. Go Hornets!