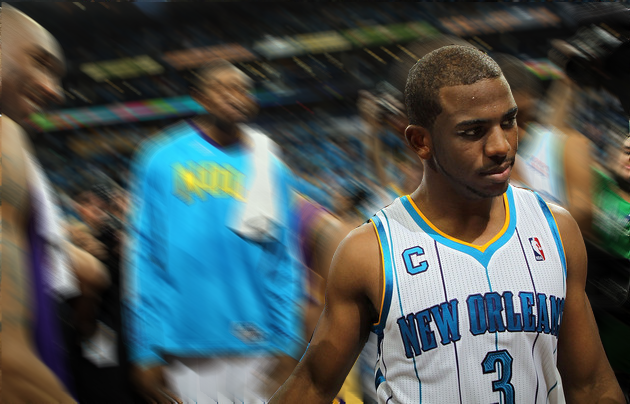 In a few days, we'll look back on this series in a largely positive manner. I'm sure of it . That the Hornets took the L.A. Lakers to six games is remarkable in and of itself.

But it doesn't change the fact that this concluding game marked a return to those things we grew to so vociferously despise over these last five months. Chris Paul's passivity. The almost hilarious absence of perimeter shooting. Mis-evaluation of bench players. Those three things, probably more than anything else, define the 2010-2011 Hornets. And they most certainly defined them in their obliteration at the hands of Los Angeles.

It feels strange to criticize Chris Paul after the series he's had, but Paul absolutely failed to show up in the first half. It's one thing to have an off half (which, quite frankly, is an apt description of Paul's second half anyway). It's quite another to not only not shoot the basketball, but to literally avoid the ball entirely for possessions at a time. Where the national audience may have been somewhat shocked, we could do no more than sigh knowingly. It's true that Los Angeles pulled away in the third quarter, but the number of opportunities New Orleans left on the floor in the first half thanks to CP3's vanishing act was staggering.

Look, I enjoyed being "proved wrong" as much as anybody when Chris Paul killed the Lakers through five games. I strongly believe it will be a long while before a point guard has the kind of six game playoff stretch Chris Paul just did. But this series didn't answer the long term questions we had about Paul coming in. We saw that when he wants it, he's quite possibly the best basketball player on the planet. But we already knew that. What we still don't know is what causes those stretches where he doesn't seem to care, where he pumps the ball listlessly into the hands of Trevor Ariza, of Willie Green. That's as much a part of the fabric of the new Chris Paul as the stunning brilliance of Games 1 and 5. That's the reality.

In the meanwhile, there is absolutely no way anyone can question Paul's commitment to this team, this organization, or this city. His passivity in the first half of this game was a season long trend - caused by his surgery, Monty Williams' new offense, what have you - not an isolated instance of him "giving up on the team." We'd do well to remember that as the off-season media machine begins to twist and manufacture The Chris Paul (Where Will He Go!) Story.

Not too much needs to be said about the perimeter shooting, I don't think. That's a subject we can finally put away for now. Maybe it will be solved this summer, maybe it won't. But we're done with it for 2010-2011. I've recoiled in horror at Willie Green and Trevor Ariza bombing away from deep for the final time this season, and it comes as a massive relief. Similarly, I don't want to get too much into Monty Williams' bench either. I liked the move to go to Mbenga out of desperation late, but playing a 26% defensive rebounder (Aaron Gray) for a total of 7 minutes in a game where the opposition absolutely destroyed the offensive glass (~40%) will justifiably draw critique. Allowing Jarrett Jack to hoist jumper after jumper off the high pick and roll instead of penetrating - again inexplicable. My opinion on Willie Green and Trevor Ariza isolations and pick-and-rolls is also well known.

At the end of the day, I believe Monty Williams wrapped up a fantastic rookie season as a head coach tonight. The way he motivated this team from Day 1, the defensive principles he instilled, and the sense of team basketball he created were all remarkable. We're set for the future at head coach, and it feels great to type that. But in terms of determining which of his players are efficient from which areas of the floor (obviously a critical aspect of offensive basketball), he has much to improve on. It's excruciating now, but knowing Williams' work ethic and desire to improve, I think we'll see changes soon. And again, we really should be grateful to the old Bower-Weber front office for pursuing him and Tom Thibodeau. They nailed it.

In any case... it's now the offseason.

It's been an exhausting, exhausting year in every sense. On the court. Off the court. In between. Almost every player on the roster followed a pretty damn engrossing story arc over the course of the season. Chris. David. Trevor. Emeka. Marco. Willie and Jarrett. Aaron and Didier. Marcus. Carl. Quincy. Jerryd. Peja. The season started with a bang and right when it looked it would end with a whimper, the Hornets, thanks to the play of guys like Paul, Landry, and Ariza, made sure they went out with an almost unimaginable flourish.