Share All sharing options for: Hornets vs Lakers, Game 3 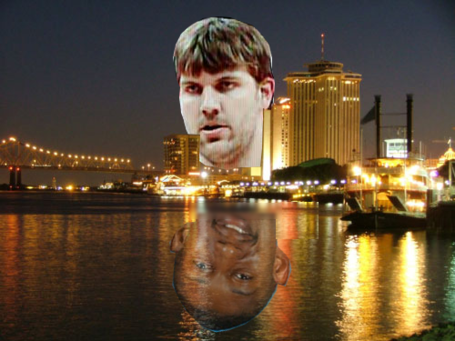 With the series tied 1-1, the Lakers and Hornets shift from LA to New Orleans for a pivotal game 3. The Hornets are coming off a sloppy game 2 loss plagued by careless turnovers and an inability to generate offense.

Before we get to the key trends to watch- an impassioned plea.... DON'T let this be like the Celtics game a few weeks ago, where the road team (the Celtics) had more fans in the building than the Hornets, and the Hornets admitted that the crowd actually NEGATIVELY affected their crunch time line up because they were so clearly rooting for the Celtics. FAN UP, NEW ORLEANS! Head to the Hive tonight and get loud for your Hornets.

Let's take a look at the key trends from game 2 to watch in game 3. You can find my breakdown of the key series match ups here.

Trend #1- Respond to the double team / Wake up, shooting guards

If you watched the Celtics Knicks game Tuesday night, you saw Carmelo and a cast of D-League scrubs push the defending Eastern Conference champs to the brink.How did the Celtics stop him??? As soon as Melo touched the ball, the Cletics sent a second defender flat out sprinting at him. This wasn't a "help" defender or a man shading over to him, this was the Celtics saying "Melo isn't beating us, let's see if the other players can run a four on three and score." The Knicks couldn't, and the Celtics won.

One night later, the Lakers tore a page out of the Celtics book to defend CP3. Every time CP3 tried to drive the lane or run a pick and roll, a second defender would jump out at him and completely leave his assignment. While CP3 still got some points, he was no where near as effective because the Lakers decided that there was NO way he would beat them single handily.

When a team pulls this move, it results in tons of wide open jump shots and easy driving lanes for the other players. If the other players can score, they should have a field day. Unfortunately for the Hornets, no one else could score. Specifically, Willie Green and Marco Beli where HORRENDOUS, missing wide open shots left and right and giving up plenty of unforced turnovers. Carl Landry was remarkably ineffective too, missing several wide open jumpers. The three of them (and all of the Hornets) need to bring their A game on offense. If CP3 gets the hard double, we need the rest of the team to take advantage of the extra man and score.

All of the Hornets against the "4 on 3" Lakers D.... except for Ariza. Ariza consistently got to the whole, grabbed offensive boards, and was a general terror on offense. On the defensive end, he completely shut Kobe down. It was almost certainly his best all around game as a Hornet. Don't lose that momentum Trevor! If Ariza has a similar game, the Hornets almost definitely win tonight. If, on the other hand, Ariza resorts to the game he played in game 1- shooting contested jumpers with 18 seconds left on the shot clock, letting Kobe shoot uncontested jumpers, and just generally play a passive game, the Hornets are going to have their hands full tonight.

Trend #3- Oak needs to be IN the game

Listen, Oak, I love you, and some of the whistles against you have been pretty picky. But stop putting yourself in position to grab those stupid fouls! Don't shuffle your feet when you set screens so you don't pick up cheap offensive fouls! Quit putting yourself in a position where it's easy to call touch fouls on you on defense!!! The Hornets need oak on the court. Even more, we need him to provide some semblance of offense when he's on the court. Oak has done neither in the first two games.

Look, game 2 isn't going on Landry's personal highlight reel. But he's shut down Pau Gasol in both playoff games, and he's proven his ability to score against the Lakers big men. If he keeps bringing that energy, he's a big weapon for the Hornets. If he starts knocking down his catch and shoot mid-range jumper (the DWest special), he's goign to be dangerous in this series.

The Lakers are 5.5 point favorites. As I mentioned above, the Hornets played a sloppy, inconsistent game in game 2.... and they still had a chance!!!! The Hornets can beat this team, especially when they're firing on all cylinders on offense. With the momentum of the Hive behind them tonight, I think the Lakers double Cp3 strategy backfires as some jump shots start falling. It might not be pretty, but the Hornets pull of the upset tonight.