When David West went down two weeks ago in Utah, there was a very real chance that New Orleans would miss the playoffs. Since the Hornets clinched the playoffs last week though, it's been a mad rush to avoid the L.A. Lakers, regardless of the implications for seeding.

Memphis upped the tanking ante last night, resting the "injured" Tony Allen and Zach Randolph in a game that could have boosted them to a higher seed. Since the Hornets own the tiebreak over Memphis, if the Grizzlies desire it, the 8th seed will be theirs tonight with another display of ineptitude against the Clippers.

The tank-fest will presumably continue on the Hornets' end tonight. Here are the new scenarios:

Let's start with Option B. If the Hornets win their game with the Mavericks tomorrow, nothing else matters. Winning automatically sticks the Hornets in the 7th seed regardless of what happens with Memphis' later game, and it also automatically sticks the Mavericks in the 3rd seed (and L.A. in the 2nd) regardless of what happens with Sacramento's later game.

Option A seems moderately unlikely with Memphis playing to lose tonight. If their tanking plans do go awry, the Hornets could play the Spurs in the first round if they drop their game to Dallas (if they win, Option B is in play no matter what).

If we assume that both the Hornets and the Grizzlies succeed in their respective quests to mildly annoy the basketball gods, we come to Options C and D. In this case, the Sacramento/Los Angeles game decides our first round fate. If Marcus Thornton and Co. can't beat the Lakers, we face the Lakers. 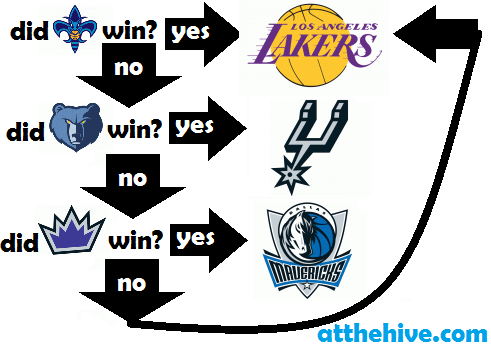