Share All sharing options for: Hornets 106, Suns 100: An Emotional Victory for CP3 and Co. 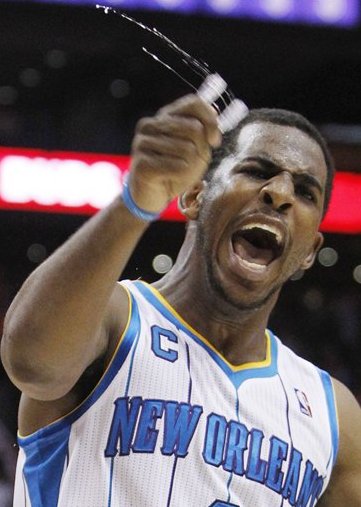 The picture pretty accurately summarizes the game. On an emotional night following the loss of David West, the Hornets battled back from a double digit deficit to pick up an absolutely critical road victory at Phoenix. Chris Paul punctuated periods of relative passivity with multiple stretches of brilliance, none more impressive than his final two minutes, when he slammed the door on Steve Nash, the Suns, and potentially their flickering playoff hopes. And in doing so, he reminded us that a team with Chris Paul on it can never be written off.

Some quick bullets up front:

Anyways, back to Chris Paul.

With 2:41, Steve Nash missed a dagger three pointer that would have put the Suns up four. At 95-96, New Orleans came back up the floor on offense. Here's how their next 5 possessions unfolded:

There will be some that say the Hornets' season effectively ended when David West's left foot touched the hardwood in Salt Lake City. In a sense, I don't disagree. I had significant hopes for this team in the playoffs. The offense was, at long last, coming together spectacularly; we had already seen the team play terrific defense all year long. In my opinion, with the new offensive system, a healthy Hornets team stood a reasonable shot of knocking out every team in the West save the Lakers. Then the Utah game happened. Carl Landry is a great player, but he's not David West. My expectations for the rest of the year went from "reservedly optimistic" to "none whatsoever" when the West news came out today.

At the same time, a lack of expectations does not imply the season is over. Far from it. David West is one of the great players in Hornets franchise history; like Dell Demps said yesterday, his jersey will hopefully one day hang from the rafters. But a Chris Paul comes around once a generation. For all the links between Chris Paul and New York or Los Angeles or Barcelona or wherever, he currently plays for the New Orleans Hornets. Anyone that doubts his commitment to this team need look no further than his final play in regulation in Utah- where, on an almost entirely meaningless/desperation play, he jumped over Al Jefferson for a loose ball and proceeded to crash five feet to the ground directly on his hip- or his post-game interview in Phoenix where he was literally moved to the verge of tears after a question about David West and his teammates.

If you look at it logically, statistically, analytically, yes, the most likely outcome for the 2010-2011 Hornets is either a trip to the lottery or a first round loss. But that's the thing with sports- the outcomes are binary, but winning and losing don't exclusively determine fan experience. 29 teams fail to win the NBA Finals every single year, but that doesn't mean that those 29 fanbases don't have experiences worth remembering. Forget the playoffs, forget the matchups. For the next two weeks, we get to watch a future Hall of Famer try and will his team into the post-season against a tough, tough schedule. Chris Paul still plays for New Orleans, and if tonight was any indication, that still means a damn lot.