It is currently today, and the Hornets take their talents to Carmelo.

Inspired by Posting and Toasting's stupendous previewing abilities, I have realized that it's high time to step the At the Hive game up. Today marks the grand unveil of the new preview scheme, which will be strictly adhered to on 60% of all nine-lettered days. Onward!

- C. Anthony's FGA to assist ratio with the Knicks is 11.6, or almost double his Nuggets career rate of 6.2.

- Guard L. Fields is easily the best defensive rebounder on the team at his 19.5% rate. New York's starting front court of A. Stoudemire and R. Turiaf average an 18% and 14% rate respectively.

Poignant Thought(s) About the Knickerbockers:

Renowned clairvoyant Seth R. of P+T is scheduled to make an appearance shortly. Meanwhile, please stare at this blank space:

i.e., the player who most typifies the core principles of the existence of Raymond Felton; whose Feltonicity stands above the Feltoniousness of all other would be Feltonites; put simply, it is he who is most Feltony. 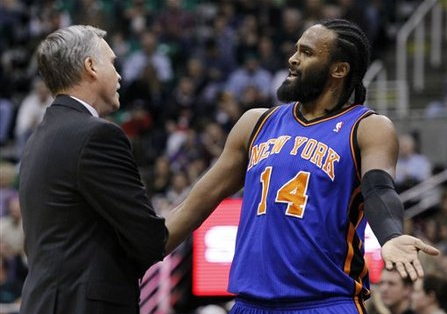