Manna from Heaven (aka a diversion to help us forget the last game).

Share All sharing options for: Manna from Heaven (aka a diversion to help us forget the last game). 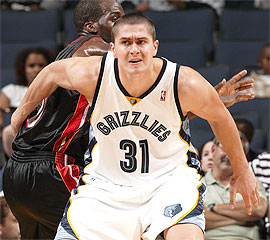 Madman GM David Khan famously described Darko Milicic this past offseason as "manna from heaven." I'm pretty sure the above photo is in fact Darko's original reaction to hearing the phrase. Even he doesn't buy it.

Yeah, I know, it's a tired reference by now, but I just can't help it. I still chuckle every time I think about it. Plus, it always makes me wonder who the phrase could be accurately applied to. I'm curious about this in relation to the Hornets and their fans in particular. Throw realism to the wind, and consider for a moment which players would be franchise-changers if they suddenly fell from the sky and landed in New Orleans Arena, clothed in Hornets garb and ready to play. I'll tell you a couple of my picks first, and then I'd like to hear from you. 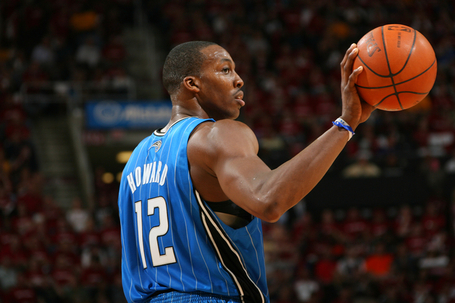 To limit my choices, I'm going to stick with players currently in the league.... and time machines. More on that below. Anyway, once that is taken into consideration, this becomes really easy. First choice has to be Dwight. Sure, he's got his flaws. He can be a whiner, and as a result he racks up way too many technical fouls. His off-court personality is full of the sort of irrepressible charm that makes him, well, charming... but also annoying. He has a classic case of "big man free throw syndrome." Other than that nitpicky sort of stuff, the main complaint against him has generally been the lack of a refined offensive game. That criticism has lessened somewhat this season, as he's added a bit more polish, but let's be real here... limited or not, Dwight's offense is also brutally effective. And I don't mean that in the Tyson Chandler sense of very low usage but sky high efficiency. Dwight maintains both high efficiency and high usage. Remember how much the Crescent City Connection kept opposing defenses off balance? Just imagine opposing teams having to face a Chris Paul/Dwight Howard pick and roll every time down the floor.

A Hornets team featuring both Chris Paul and Dwight Howard could easily be near the top of the league both offensively and defensively. Howard can be the man in the middle for an elite defense (as Emeka has been this season, and Tyson was previously) AND be a dangerous offensive force. For four years in a row now Howard has posted offensive ratings above 110 and defensive ratings in the 95-99 range. In other words, he's ridiculously great and dominant on both ends of the floor. Get Chris Paul and Dwight Howard on the same team, and you've got yourself a championship. Sure you could make an argument for a guy like Lebron or Wade over Dwight, but as ball-dominating wings I don't think they would fit in as seamlessly with a Chris Paul led team as Dwight Howard would. 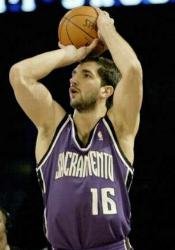 The Hornets got one legitimately good season out of Peja in 2007-2008. Peja's 44% three-point shooting in 2007-2008 was a big part of the Hornets success that year. The rest of his time as a Hornet was marred by frequent injury and as a result of injury and age, inconsistent play. Regardless, he's a personal favorite former Hornet of mine and I know that's also the case for many other Hornets fans. As a result I can't help but wonder how this team might look if the Hornets could have a younger, healthier Peja to play alongside Chris Paul. As others have pointed out, Chris Paul and three-point shooting go together like two things that go together. Just imagine Peja at the height of his powers dropped onto a team with Chris Paul, David West, Emeka Okafor and Carl Landry.  If you need a refresher, Peja at his peak was scoring 24 points a game, shooting 48% overall and 43% from three, posting a PER of 21.8 and generating around 120 points per 100 possessions. I'll take it!

Those two guys were the first that came to my mind. Who do you think would be "manna from heaven"?

By all means, use your flux capacitors if necessary, and if you'd like to be completely fantastical and mention retired players and hall-of-famers, go for it. One last note- I just want to stress that this is simply for fun, and not meant to be a complaint against the current roster or anything of the sort. Perhaps it wasn't necessary to point that out, but I'm a geek.