Make no mistake; that was an awful, awful loss.

The Hornets finally got a full lineup on the court, and the team put in a complete performance on both the offensive and defensive end for three quarters. Despite the Rocket's outrageous outside shooting performance, New Orleans still managed to limit Houston on the offensive end. Keep in mind that this Rockets team came in with one of the league's best offenses at 111.1 points per 100 possessions.

But then it all fell apart. Unfortunately for the Hornets, they let their stellar performance slip in the fourth. Houston's three pointers- multitudinous as they were- could still have been overcome if the Hornets had just taken care of the ball and run their offense properly. Instead, New Orleans managed to scrape together a meager 8 points through their first 11 possessions of the final quarter, and it was all downhill from there.

- Anyone that was heartened by Chris Paul's previous two games coming off the All-Star Break may have some reconsidering to do. CP rarely got to the lane, settled for poor shots, and after carving up Houston's defense with his passes in the first half, did very, very little in the second. On the plus side, Paul's defense was superb, and it's tough to place much blame on Paul for Lowry's crazy three point display. But at the end of the day, it was a classic fourth quarter and second half collapse by CP3. And just the fact that we're now routinely associating the words "classic" and "collapse" with Chris Paul is immensely disturbing.

- The bigs blocked a ton of shots. Unfortunately, their skills couldn't be used out on the perimeter where the Rockets lit us up, but the paint was effectively defended throughout the game.

- Aaron Gray got no run. The Rockets destroyed the Hornets on the offensive glass (35%). Whatever Monty Williams' initial logic was, it ended up being a poor decision. That Monty failed to adapt makes it more so.

- For whatever reason, the team seems to be absolutely convinced that Trevor Ariza and Willie Green are great three point shooters. They're not "great," nor are they even "average." I'm tired of harping on this issue. Rough as it is to say- it will be March on Tuesday. If the Hornets haven't adjusted to this through four months, they probably won't as we move to the playoffs. And that's sad.

- Corollary to the above: Marco Belinelli was scorching hot today. Naturally he wasn't on the floor at the end of the game.

- Despite Kevin Martin posting yet another crazy free throw line, the Hornets actually did a reasonable job of keeping the Rockets off the line. On the flip side of that foul call line, Houston rookie Patrick Patterson- who you may remember was an At the Hive favorite last summer- committed 5 fouls in 8 minutes of playing time.

- Finally, this doesn't seem nearly entertaining as it did when we led by 15, but... 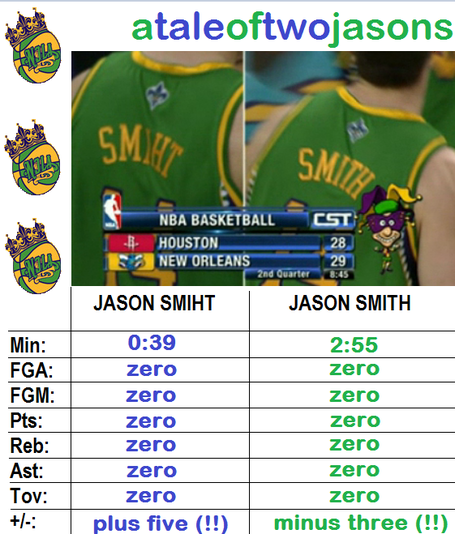