No matter how you feel about Marcus Thornton being traded or the trade itself, Carl Landry is a good basketball player. There's plenty of reasons to be excited about Landry being a Hornet.

Landy, who played his colllege ball at Purdue, was the first pick of the second round in the 2007 NBA Draft. He was selected by Seattle (RIP) but would ultimately play his first NBA ball with the Houston Rockets under Rick Adelman. Though his minutes were limited early on, Landry put together a truly stellar rookie season. Per 36 minutes, Landry averaged 17.3 points and 10.5 rebounds on 61.6% shooting from the floor. He had a PER of 21.4 and produced 0.251 win shares per 48 minutes. Those are really impressive marks for any player, much less a rookie. Eventually he became a regular part of Houston and then Sacramento's rotation. He was relied on fairly heavily by Houston during the 2009-2010 season. Granted, he's never quite equaled the per minute production of his rookie season, and his time with Sacramento has paled in comparison to his time with Houston. Still, he's been consistently productive in some form or another.

Offense is definitely Landry's strength, which is good, its what the Hornets need. Landry scores by shooting a high percentage close to the basket and by getting to the foul line and shooting a solid percentage from there as well. For his career, he scores 1.43 points for every field goal attempt and has a stellar offensive rating of 118. Even now, during a down season for Landry, he's still producing around 109 points per 100 possesions. There are only four Hornets with a better mark this year: Chris Paul (124), Emeka Okafor (113), Aaron Gray (112), and David West (111). As good as Landry is on that end, he does have his limitations. He doesn't set up other teammates much, for one. To be fair, that's generally not expected of big men anyway, so we can't penalize him much in that department. He also has limited range. This season Landry is shooting a very nice 75.2% on shots directly at the rim and a decent 42.7% on shots beyond the rim but less than 10 feet out. In the 10-15 feet range that number drops to 37.3%, and between 16-23 feet Landry shoots just 34.0%. So while he'll be backing up David West, Landry can't be expected to replicate West's range, though Landry does occasionally put up some attempts from out there. West, in case you're curious, shoots 65.5% at the rim, 49.0% from 16-23 feet, and around 45% everywhere else. There is one caveat to that though. I expect Landry's outside numbers might climb a bit when he's on the court with Chris Paul. West is assisted on just under 90% of his shots from 16-23 feet. Landry is assisted on 55.6%.

It's quite possible Landry becomes the best offensive bench player the Hornets have had in the Chris Paul era. 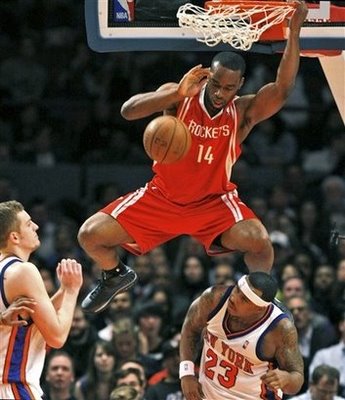 The picure on defense, as always, is murkier. I haven't watched Landry enough to give much of an analysis without looking at statistics... but who I am kidding? I'm always going to look at statistics. So, based on Defensive Rating, Landry was a good defender with Houston and a poor one with Sacramento. However, that likely has a lot to do with the fact that those Houston teams were good defensively and the Sacramento teams have been poor defensively. What's for certain is that Landry doesn't get a lot of steals or blocks. So he's not going to contribute much in the way of box score defense. Thankfully, Rohan was able to give me a few of Landry's situational statistics from this season. On isolation plays, opposing players shoot just 32% against Landry. In the post, they shoot 49%. Those are encouraging numbers. In all other defensive situations Landry has been around league average. I'd be really interested to see situational statistics from Landry's Houston days in order to compare them to his current performance level.

From a reputation perspective, it seems to me that Landry has generally been considered a middling defender throughout his career. In Monty's system, I expect he'll be adequate against most opposing power forwards he faces. As he's slightly undersized for a power forward, its hard to see him playing much center, but Monty Williams has stated he wants Landry to have a big role, so who knows?

Note: Based on that link above, Landry sounds really happy and really excited to be here. It's hard to tell in print, but to me it sounds quite sincere.

Carl Landry on the boards:

Looking at Landry's rebounding stats, I'm reminded of Brook Lopez. Like Lopez, Landry started out putting up solid numbers on both the offensive and defensive glass. Also like Lopez, Landry's board work on both ends (but particularly on the defensive glass) has seen a sharp decline as his career has progressed. I'm also reminded of David West, who did his best board work as an unheralded rookie fighting for minutes. I think people sometimes forget that West averaged 11.5 rebounds per 36 minutes his rookie year, and had a beautiful rebounding percentage line of 14.0 ORB%, 22.6 DRB% and 18.2 TRB%. These days, Landry is still semi-productive on the offensive glass (just outside of the top 75 among players who've played at least 100 minutes), but woeful on the defensive glass. As Rohan pointed out when the trade first went down, Marcus Thornton as a 6-4 shooting guard is considerably more productive as a defensive rebounder than the 6-9 Landry. In fact, even Landry's career high defensive rebounding percentage of 16.4%, posted during his rookie season, is lower than Thornton's current mark of 17.1%. All that being said, I hope I don't sound like I'm bashing the guy. The fact is, defensive rebounding is not a concern for the Hornets. Emeka Okafor, David West, Chris Paul and Trevor Ariza (among others) take care of that and they do it well. It would be nice to see Landry bump his rebounding numbers back up, but if he doesn't? Not a big deal. In fact, if we do see any improvement from Landry on the rebounding front, I think I'd rather it be on the offensive end. Which is not to say that improvement in both areas wouldn't be nice.