Share All sharing options for: Game 2: Hornets vs. Celtics

Akis of Sactown Royalty and the awesome NBA Mashups did this mashup of the Commissioners, David and Eric, specially for us: 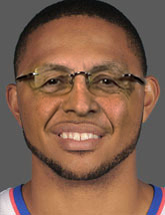 Eric Gordon Out Tonight
The Times-Pic reports a bruised right knee for Eric Gordon, and the Hornets will hold him out of the game because of it. Gordon apparently bumped his knee against Grant Hill late in the fourth quarter.
Marco Belinelli will start alongside Jarrett Jack in the backcourt.