Peja Stojakovic will likely be remembered in NBA lore as a Sacramento King, as well he should be. It was Sacramento where he arrived as a lost 21 year old rookie, and it was Sacramento where he emerged as one of the finest shooters in the history of basketball. With the Kings in the early 2000's, Peja played a huge role on of some of the most memorable playoff teams of modern times.

But he retires today as one of the most important figures in the history of the Hornets franchise as well. He was arguably the most heralded free agent acquisition the Hornets have ever made. His 2007-2008 season was the best of his career, in terms of three point percentage, and arguably the greatest shooting year in the three point era, behind only Glen Rice's 1997. He was an integral part of one of the most successful seasons in franchise history. And, for all of Chris Paul's transcendent greatness, CP3 would be the first to tell you that his time in New Orleans wouldn't have been the same without Peja Stojakovic.

So, in honor of his retirement, a republish of a farewell to him from last November. Best of luck, Peja Stojakovic. The league, its fans,... its point guards - we'll all miss you tremendously: 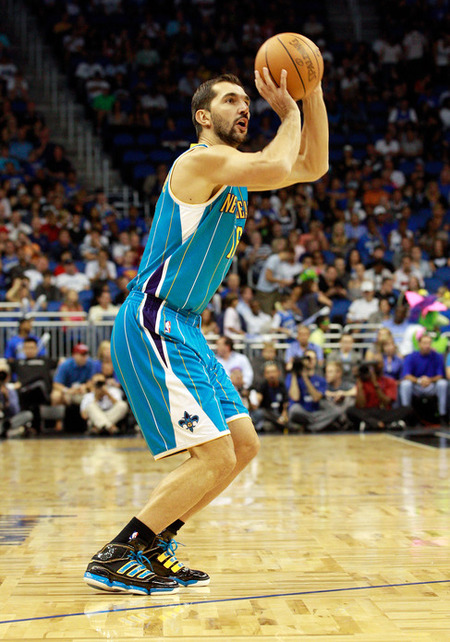 The following was published on November 21st, 2010:

I still vividly remember the day we acquired Peja Stojakovic. It was a sunny Saturday in July. I fired up the ESPN.com homepage and was greeted by a large image of Peja and the Hornets logo. For a team that had been under the radar for years, Peja was a huge name. Shocking, even. Peja Stojakovic? Coming to New Orleans? A few weeks earlier, George Shinn had mentioned that he was "seeking a big-name free agent." And Peja was it. He may never have been a superstar, even back then, but years of national playoffs exposure with the Kings and that legendary, over-the-head stroke had made him famous.

Even though David West and Chris Paul had broken out by Summer 2006, it was the acquisition of Stojakovic that put the Hornets on the national map again. It sounds so funny now... but it seemed equally surreal then. I remember one of my brother's friends came by later in the day, and the first thing he said was, "Do you know that the Hornets got Peja Stojakovic?" We all laughed. It didn't seem real.

The Hornets won their first four games with Stojakovic and began 8-3 overall. In the Hornets' 8th game of the season, Peja became the first player in NBA history to open a game with 20 consecutive points for his team. Things were going swimmingly, but Peja's hot start to the season was quickly curtailed due to a back problem. Relegated to the inactive list on November 25th, Stojakovic eventually underwent back surgery and missed the rest of the season. A month later, Chris Paul went down for 17 games with an ankle injury and a month after that, David West went down for 30 games with a forearm injury. The Hornets' breakout season had to be postponed a year.

But when it did arrive, Peja returned with a vengeance. Factoring in quantity and efficiency, there's a case to be made that Peja's 2007-2008 campaign was the finest three point shooting season by any player ever. No player in NBA history has ever made as many threes with the accuracy Stojakovic displayed that year. Only one other player has ever made 200 threes in a season while maintaining Stojakovic's accuracy (Glen Rice in 1997, as a Charlotte Hornet). He played 35 minutes a night for 77 games. He shot 93% from the line, essentially functioning as a basketball Mariano Rivera. Over the next two years, Peja would fall back to his injury-riddled ways. But what he accomplished in 2007-2008 was magical. The common refrain is that Peja was lucky to have Chris Paul passing to him. It's true, but Chris Paul was equally lucky to have Peja Stojakovic to pass the ball to.

If there was one word I'd use to describe Peja, it would have to be this: soothing. There was something so soothing, so amazingly calming about that stroke. The ball might have swung wildly around on offense with bodies flying everywhere, but the moment the basketball touched his hands on the perimeter, everything just seemed to freeze. His feet would assume their positions, ever so slightly angled towards one another. His hands would bring the ball gradually towards his left, lift upwards, and over the top of his head. The wrists would snap, well beyond the reach of even the longest defenders. Then came the arc. Nothing else matches that arc. Most shooters vary their shooting angle based on location, defenders, timing, and so forth. For Peja, it was always the same. Straight up, straight down. Corner, straightaway, wing, it didn't matter. At the end, the ball would splash down from up on high.

You wanted Peja Stojakovic to shoot the ball regardless of where he stood on the floor. And you breathed a sigh of relief when he did shoot it, even before you knew if it was going in or not. That was the most amazing thing about him.

It almost feels like I'm eulogizing Peja and his game. He's still only 33, and a shot like his will never age. There are many more threes to be made. But for me, the Peja Stojakovic trade symbolizes the end of an era of Hornets basketball. It was an era that saw the Hornets triumphantly return from Hurricane Katrina, an era that was ultimately flawed but intensely satisfying. Chris Paul and David West had as much to do with it as anybody, but they're still here, steering New Orleans into the next chapter. Peja was a part of the last chapter, one that's now closed.

I'll leave you with one more story: the first time I watched a Peja Stojakovic shoot-around. It was 2008, a few hours before tip off at the Staples Center. A friend and I had arrived super early, hoping to meet some of the players. Eventually we were banished to our seats in a remote corner of the upper deck. Staples Center stays dimly lit during games, but before games, it's even dimmer. We climbed to our seats; it was still an hour from tip, and the stands were entirely empty. It felt like the only people in the arena were us and the players warming up, hundreds of feet below us. Eventually, the Tysons and Vujacics and Mbengas retreated to the locker room. Out came Peja with a trainer.

Salary caps, luxury taxes, team construction, defense, rebounding, they're all integral parts of the sport. But sometimes, nothing beats a player simply shooting a basketball.