Share All sharing options for: Notes from Hornets Open Practice

The Hornets hosted an open practice at the New Orleans Arena today, right after introducing Eric Gordon, Al- Farouq Aminu, and Chris Kaman. The guys went through a couple drills (with the three newest Hornets watching from the bench), then split into teams to scrimmage. The likely Hornets starters (minus Gordon) were on the black team, while mostly reserves and camp tryout guys made up the white team. The results are about you would expect when the starters are up against a scout team, but it ended up being a close score as the black team prevailed 46-43 (I think.). Some notes after the jump.

- Jarrett Jack looks more than ready to take the reigns of this team. He made mostly good decisions and shot the ball from range very well (more on that later).

-Both Qunicy Pondexter and Trevor Ariza seem to have spent some time working on their mid-range game, as both took several shots on pull-ups, with predictably mixed results.

- The focal point of the White team's offense was the newly re-signed Jason Smith. He started out by missing his first 3 jumpers, but settled in hitting several in his normal 15-20ft range. Dude can still shoot it.

-Smith may have had more success early because he was playing center for the White team and was being guarded by Emeka Okafor, who was either hesitant, or too slow to get out on the perimeter and contest the jumpers. Okafor-Kaman at the same time will not work if the other team plays anything resembling a stretch 4.

-There is a player named Squeaky Johnson on the Hornets. He is a PG, is fast, and has very long dreadlocks. He had a solid game at Memphis last night, and looks to be competing for the 3rd PG spot on the team. Had a few nice plays in the scrimmage.

-After signing late last week, both Jason Smith and Carl Landry played in the scrimmage, and looked to be in decent shape. Carl started for the Black squad with most of the other projected starters.

Carl Landry with best fans ever. 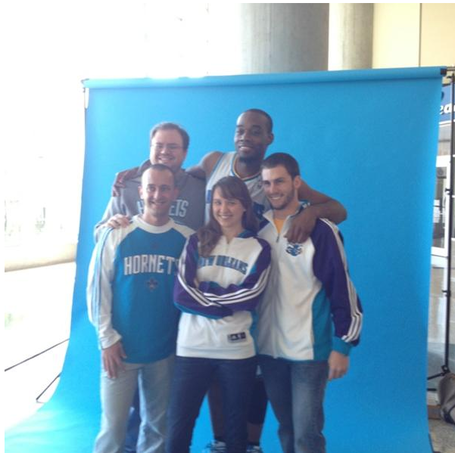 -Chris Kaman is a funny dude. He hijacked his interview from Hornets MC Rob Nice and had the crowd laughing on a few occasions. I'm sure we'll be getting some good quotes from him this year.

-I was randomly chosen to participate in a 3-point shootout at halftime of the scrimmage. I elected to give it a try despite currently lacking an ACL in my right knee and having not picked up a ball since around June. I was paired with Marco Belinelli and faced off against another fan who was teamed with Jarrett Jack. The results were about as expected for me: 0-6 with at least 3 airballs. I believe I drew iron twice. I wasn't paying attention (trying not to fall down), but apparently Marco did not fare a whole lot better than I did. We lost to Jarrett Jack and his partner by a couple of baskets. Thankfully my counterpart did not make any shots either, but Jarrett outperformed Marco to get the win. Marco called me "boy" about 5 times in 3 sentences before the contest while attempting to pump me up. Jarrett seemed really into it as well. We were told the prize for the winner was two tickets to opening night, but they gave us both tickets anyway. I got two lower bowl tickets and a bunch of assorted Hornets goodies. Pretty cool. (There is video of this floating around out there. If we get a hold of it I'll put it on here so you can all have a laugh at my expense. If was truly a horrendous performance.)

Update - Video via our own Matt McIntosh:

-As we were walking out of the Arena we were asked to take part in a photo shoot for the Hornets to use in their ad campaign this year. We agreed and got in line. After a few minutes, Eric Gordon came out in full uniform and joined in on the fan photos. We didn't get to meet Gordon as he left right before our turn, but Carl Landry took his place and you can see the photo above. They then instructed us to take some single photos and made me do stupid things like yell, fist pump, and point. If I ever see a picture of me doing a 3pt monocle on a billboard somewhere, I will surely crash my car out of shame.

-In all it was a fun thing for the Hornets to do as a reward for fans and provided a small glimpse as to what we may see from the team this year. I heard that around 1,500 fans showed up today, which I think is a nice turnout for an event like this. Even more excited for the season to start.