Share All sharing options for: A Time to Reflect: Chris Paul's Tenure

It's easy to look at this offseason as another "trade demand" by Chris Paul and simply shrug it off as another star player being a star player. In the grand scheme of things, that may certainly be the case but in this situation it's also important to note the star player in relation to the franchise. Our situation is completely irrelevant to LeBron James' situation in Cleveland. If anything, LeBron taking off made most of us small market fans anticipate when it was going to happen to our own players and that's well and fine. That's just the way the new NBA works (the AAU era, as I like to call it) and we have to adjust to that. But this isn't a discussion on basketball philosophy or simply to debate the intricacies of the CBA and what changes should be made for the long term. For once, we need to sit back and appreciate what a player did for the franchise. Not since "Pistol" Pete Maravich has someone meant so much to New Orleans basketball. It's arguable that the only reason basketball was saved in New Orleans is because of Chris Paul. So for a little bit, we all need to sit back and appreciate all that CP3 has done for the franchise.

Chris Paul was drafted 4th overall in 2005 out of Wake Forest University. Baby faced as can be and seemingly soft spoken, Paul was drafted a couple months before Hurricane Katrina ravaged the Gulf Coast region and devastated the New Orleans area. After that, the Hornets relocated to Oklahoma City temporarily where Chris Paul dazzled us and won the Rookie of the Year award. The next season, with increased expectations for New Orleans/Oklahoma City, Paul suffered through various injuries (as did David West and Peja Stojakovic) and the Hornets fell just short of making the postseason. That offseason, however, they were set to return to the city of New Orleans.

At that time, rumors are abound that George Shinn wanted to relocate to Oklahoma City permanently and there were even comments from then Head Coach Byron Scott showing support for the move as well. When the NBA committed to New Orleans, it took a player with the exposure, appeal and talents of Chris Paul to be the face of the franchise when it returned. Paul was actually out there with a hammer and nail to literally help rebuild the city in the wake of the devastation and became the poster child of the region upon the team's return to New Orleans.

Paul's 2007/2008 season is something magical. He was terrific all year, helped lead the Hornets to their first (and so far, only) Division Championship in franchise history and was (in my biased opinion) screwed out of the MVP Award with most people simply claiming "I'm surprised Kobe Bryant has never won one." Paul and the Hornets' magical run continued into the postseason before, depressingly (I'm still not over it), losing in Game 7 of the Western Conference Semifinals to the then defending champion San Antonio Spurs. The loss saddened a lot of fans, but the sadness was subsided by what was a renewed optimism for the organization.

Things kind of took a turn for the worst after that 2008 season. Bad management decisions, halted player development and injuries across the board really affected the franchise in ways that just can't be predicted in 2009. 2010 was an equally frustrating year, one that saw Tyson Chandler get traded (for real this time), Paul himself go down to the meniscus injury, Byron Scott get fired and the team miss the playoffs. Then last summer happened and a lot of people looked at Paul with scorn when his reported "list" came out of teams he wanted to play for.

Even with all of that in the way, Paul turned in a terrific 2010/2011 season. Most people will point to his raw numbers and his lack of force as downfalls, but Monty Williams changed the philosophy in New Orleans and Paul was on board with it the entire time. 2010/2011 did, in fact, turn out to be Chris Paul's last season, but it was a season that ended with him playing magically in the postseason, spearheading renewed support for the team in wake of the disappointments of 2009 and 2010 and with Paul giving us one last season of MVP play. 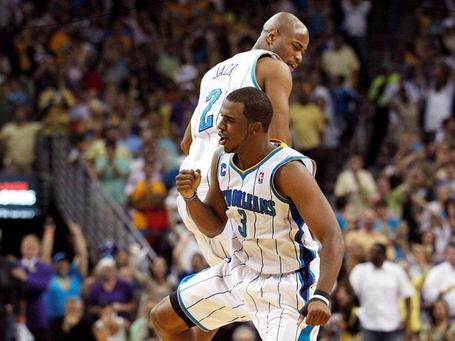