Goodbye First Two Weeks of the NBA Season, We Hardly Knew You

Share All sharing options for: Goodbye First Two Weeks of the NBA Season, We Hardly Knew You

Well, we did know some things about you. Namely all the games you would be holding, their locations, and their times. But now, alas, you are but a distant memory, for Our Dear Owner has spoken, and he is "sorry to report" (really!) that the first two weeks have been cancelled.

Players, owners, agents, etcetera, blame who you must, but the impact on the Hornets' season is worth more discussion. Via ESPN, the games missed: 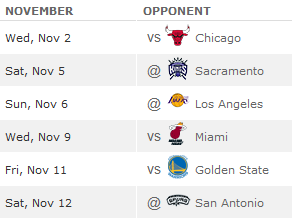 So via the cancellation, the Hornets lose the only NOLA visits of LeBron James, Dwyane Wade, and Derrick Rose (and Chris Bosh lol) for the 2011-2012 season. Yes, the ultimate goal (for Hornets fans at least) is to get a CBA that benefits small markets and allows them to be competitive, but that's a definite financial loss for the team.

Oh, and one other thing for those that enjoy pining over things that have been rudely snatched away from them: Marcus Thornton, Brandon Bass, Earl Smith the Third, and Jannero Pargo will be joining Jarrett Jack in a charity pro-am game on Thursday at Southern University.