One of the challenges in the age of modern technology is the issue of too much accessibility and too little time. Those with NBA League Pass or NBALPBB know exactly what I'm talking about. Often, you'll have some down time at the end of the day, you'll want to maybe rewatch a section of a game that just ended, but you won't know which one to pick.

The guys at Thuuz.com have come up with a solution. Thuuz essentially documents how "exciting" games are, based on a number of factors. Additionally, Thuuz posts "excitement" scores real-time, during games. On a game day, you can scroll through their NBA page to see which games are exciting at that particular moment.

Thuuz reached out to us a couple weeks ago to note that the Hornets' games with the Pistons and the Pacers ranked among the NBA's most exciting this season, scoring a 100 and a 94 respectively.

To give you an idea of what the system looks like, Thuuz ran a custom analysis for us on the Kings and Pistons games: 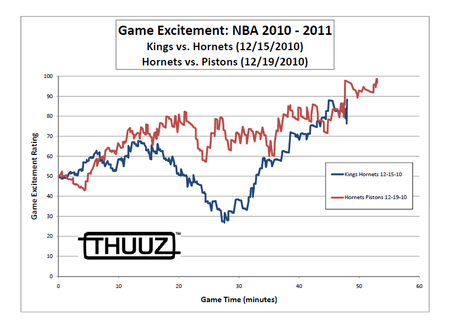 The Kings game saw a sharp decline in the Game Excitement Level, presumably as the Hornets began to trail big. The Pistons game was close the whole way. Perhaps some fans would dub a big comeback as more "exciting," but either way, it's clear the system does a decent job of picking out the better games. I'm a big fan of new, interesting ways of studying the sport, and Thuuz's methodologies are something I'll definitely be keeping an eye on.