Share All sharing options for: Know Your Enemy: Part Two

This post is a little late, as I've been slogging through the flu or something that feels like the flu. Sorry about that folks. Last time, we talked about the Spurs, the Lakers, the Mavericks and the Jazz. Today we'll talk about the rest of the teams out West who are currently in a playoff spot as well as those who have a chance of getting in.

The OKC Thunder are another team that has switched up their MO a little bit this season while still remaining successful. Last year this team was more of a defensive force than an offensive one. This season it's the other way around. OKC has regressed considerably on the defensive end but they now score so well that it hasn't hurt them overall. Whether or not the team has actually improved at all after last year's cinderella season is an open question. Honestly there was really not much reason to except much improvement, as the team made no significant additions to the roster. Regardless, they remain a solid team. By far their biggest strength on the offensive end is the ability to draw fouls and get to the line. OKC's FT/FGA ratio of .314 is first in the league by a strong margin. They've also become much better at holding on to the ball with a turnover percentage (12.8%) that ranks fourth in the league. At 37.4%, they are also one of the better three-point shooting teams in the league. Unfortunately for OKC, when it comes to defensive categories, they are a middling team in almost every one. 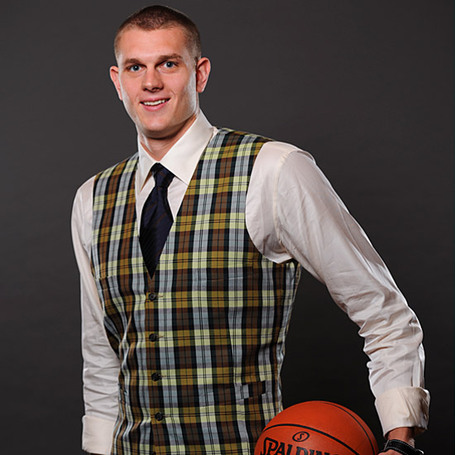 As far as individual thunderites, Kevin Durant continues to be the team's number one option offensively and he's having another great season, although he hasn't shown the kind of growth in his game that he showed last year. In many measures of his efficiency he's actually regressed. That said, the guy is still a dangerous and dynamic offensive player. Besides, any minor regressions in KD's game have been balanced out by the improvement of Russell Westbrook. Westbrook is putting up 22.6 points per game on 1.3 points per shot and posting an offensive ratting of 110. While he still turns the ball over a good deal, he's actually seen a jump in assist percentage and a small decrease in turnover percentage. Personally, I think he's a blast to watch.

A Hornets/Thunder playoff matchup sounds really, really entertaining, but admittedly the Thunder would probably be a pretty tough draw. However, as frequent AtH commenter MZURK pointed out in the gifs thread below, having Ariza on our roster is a definite plus in the Hornets favor, as he is someone who can do a relatively solid job of guarding Kevin Durant. Chris Paul himself has also shown an ability to guard Kevin Durant in spots, despite the huge size difference.

The Nuggets on-court season has been overshadowed by all the offcourt talk about Carmelo Anthony's future. Despite this, the Nuggets have performed reasonably well overall. The Nuggets as a franchise, despite the players on the roster or the coach on the sidelines, have almost always employed a run and gun style and they continue to do so this season. It's working for them offensively. They score an impressive 112.0 points per 100 possessions. which is good for second best in the league. They are second only to OKC at getting to the foul line (.299 FT/FGA), and they are also a solid shooting team, sporting an effective field goal percentage of .518. Also like OKC, they can't and/or don't defend very well. They give up 108.8 points per 100 possessions, which is twenty first in the league. 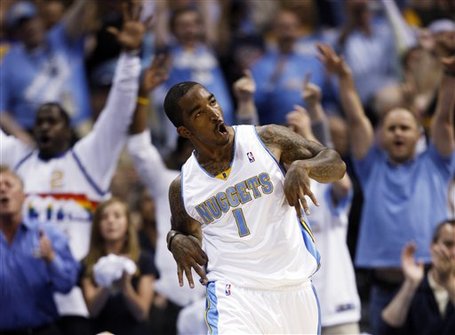 The star of the team is of course the much talked about Carmelo Anthony. Anthony remains his usual self, a volume scorer and above average rebounder. As for the rest of the roster, Chauncey Billups is still productive but has regressed to some degree, Nene remains a subpar rebounding but hyper efficient offensive big man, and Ty Lawson is by far the best backup point guard in the game.

I'd love to see the Hornets face Denver in the playoffs. What Denver did to the Hornets in the playoffs in 08-09 certainly wouldn't happen again. That Hornets team was injury-riddled and exhausted. This year's Denver squad is poor enough defensively that the Hornets mediocre offense would be able to score on them, and the Hornets elite defense is good enough to slow down Denver's elite offense.

Poor Portland. This was a team with so much promise just a year ago. Unfortunately, injuries have plagued them in a big way with the result that lottery pick Greg Oden (who is, in fact, really freaking good - don't believe otherwise) has rarely seen the floor and star Brandon Roy is unlikely to ever play at an elite level again. Even so, they've managed to stay above .500 and keep themselves in the playoff picture. They don't stand out offensively or defensively, ranking 13th and 15th respectively, but there are a couple things they do pretty well. They avoid turnovers on their side and force a lot of them on the other end of the floor. They also lead the league in offensive rebounding percentage by grabbing 30.7% of their own misses. Part of that offensive rebounding prowess comes from the excellent boardwork of veteran big man Marcus Camby. There's been lots of talk about Kevin Love and his incredible rebounding this season, and rightly so, but believe it or not old man Camby has been even better. He's collected 23.6% of all misses, an incredible mark. Unfortunately, Camby is yet another Blazer who has been hit by injury and he's currently missing games.

A Blazers/Hornets matchup? Sloooowww. Portland, as always under Nate McMillan, plays at a snail's pace. This year they average just 88.7 possessions a game, which makes them the slowest paced team in the NBA. New Orleans is just a tad faster at 88.9 possessions per game. The games would almost certainly crawl, but I feel pretty confident New Orleans would come out on top. Of course, as long as Portland hangs around in the eighth spot, it's unlikely the Hornets and Blazers will see each other in the postseason.

Memphis, Phoenix and Houston all have roughly equal records at this point, though Memphis is the closest to .500. Memphis forces a lot of turnovers and has been surprisingly strong defensively. Phoenix is good on offense and bad on defense. No surprise there, but they are in fact far worse defensively than they've ever been before. As for Houston, they've been playing in the Phoenix mold themselves. The Clippers are a team that have received a little bit of playoff buzz recently due to their recent stretch of wins, but they are simply too far behind at this point. Golden State is a team that looked like they might have a shot at the playoffs early on, but have probably fallen too far behind as well. I don't know if any of these teams will manage to knock Portland out of the eighth spot, but if I had to I'd bet on Memphis.