Share All sharing options for: Hornets 91, Thunder 89: West Wins It

It's fitting that David West knocked down the game winner tonight. Those that followed this team during its time in Oklahoma City certainly know of his propensity to knock down ridiculous shots at the buzzer, and the degree of difficulty on West's fallaway over Serge Ibaka topped any of his previous winners.

West's performance tonight was really just a microcosm of his season- he's been getting it done, arguably better than he ever has before. His PER (21+) is higher than it's ever been. His combination of offensive efficiency and usage are higher than they've ever been. With Chris Paul playing his most diminished scoring role since his arrival in New Orleans, West has had to shoulder a significant amount of the offensive burden. And of course, defensively, he's been absolutely stellar. 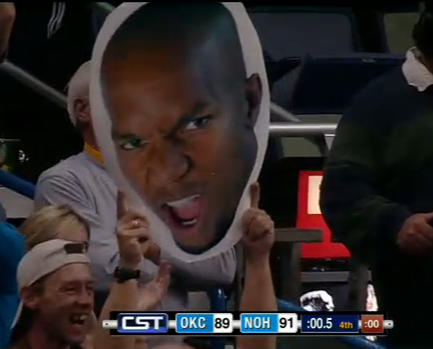 Of course, Chris Paul played an absolutely brilliant game as well. He hit the big threes, he drove the lane at will, he found teammates with ease, he literally grabbed the ball from Westbrook from a standstill, and, of course, came up with the unbelievable steal with 10 seconds to go. In related news, ESPN and NBA.com did not rank and ranked Chris Paul 10th in their respective MVP polls this week. Well done, gentlemen.

On to some game notes: