Share All sharing options for: Hornets Beat the Rockets 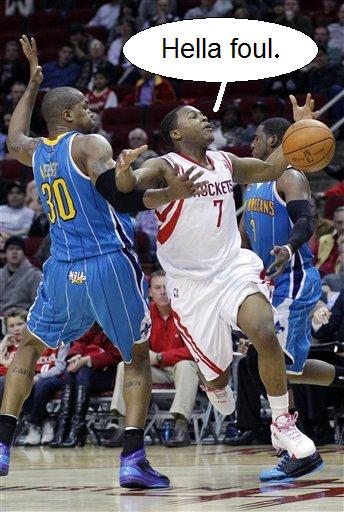 Another game and another overtime. The Rockets stayed ahead for the first 3 quarters thanks to the efforts of Kyle Lowry and Kevin Martin (and the swollen ankles of CP3 and David West), but the Hornets suddenly started playing defense like usual in the 4th and came back and ended it in overtime. My bullets:

- David West was clearly the Hornets go-to offensive player. West ended with 29 points, most importantly, with an epic dunk to tie the game towards the end of the fourth:

- The other Hornets' All-Star Chris Paul could not drive, tallied 5 turnovers, and could not connect on his jumper even before his ankle injury. But he ended the game with a crucial steal and jumper, finishing with 11 points, 8 assists, and 5 steals. As little as he seemingly contributed, the Hornets could not win without him.

- I don't know about Willie Green. He only attempted one field goal (which he made) and only had one turnover. But defensively, Kevin Martin seemed two steps ahead of him on way to his 26 points. And the Hornets were -17 with him on the court. I figure I'd rather have Beli or Marcus starting.

- The Hornets bench, led by Jarrett Jack (23 off 8-14 shooting), was pretty productive even with Marcus Thornton not scoring. Jason Smith once again hit that jumper on demand. Aaron Gray had a nice 3 minutes where he was able to post up the Rockets bench surprisingly well. If he didn't get a foul every minute I figure he would have played more.

- I've noticed Ariza's play getting better as of late (successfully driving to the hoop and actually making jumpers); he hit a pretty big late game three that gave the Hornets the lead for a few seconds. That being said, he was still 1-5 from 3 point land today, even with a solid rebounding effort (10 rebounds).

- Emeka played very solidly again, with 17 and 15, even making all three of his free throws.

- And lastly, the Hornets could have won the game in regulation with another made free throw, just like the last game.

The Hornets return to Charlotte tomorrow.