In that spirit, today's Staturday looks to dive a little deeper into the debate and provide a central location for further MT/WG discussion.

Marcus Thornton has had a poor season in 2010-2011. Even the staunchest Thornton supporter won't argue that point, and Marcus Thornton probably wouldn't either. His downturn has been largely predicated on two factors- close range shots and an inability to get shots at the rim.

But Thornton has made just 4 of 15 shots from inside 10 feet (but not at the rim). That equates to a 26% rate, almost half of his outstanding 2009-2010 mark, when he converted 25 of 51 shots from that range. The Small Sample Size Alarms should justifiably be blaring. At the same time though, let's keep in mind that 51 shots isn't the largest sample either. We can expect his 4 for 15 performance from inside 15 feet to improve, but we can't take it for granted either.

In any case, his lack of shots at the rim is a far bigger issue. 37% of Thornton's shots came directly at the rim in 2009-2010, one of the highest rates among NBA guards. 47% of his made field goals came at the rim. This year, those figures are down to 26% and 36% respectively. Essentially, Thornton is getting significantly fewer easy shots this year. He took just as many shots from range last season, but the plethora of easy ones allowed him to be an efficient scorer. Those gimme's haven't been there in 2010-2011.

As Karl Malone queried in his legendary Shape-Ups commercial.... "BUT WHY?"

The answer is actually quite simple. As I wrote many, many times last season, Thornton is tremendous off the ball. He accelerates quickly off screens, understands lanes and angles, and floats to open space very well. Jeff Bower had his flaws, but he understood this aspect of Thornton's game and maximized its value. As you'll remember, the explosion of back screens and baseline cuts we saw under Bower came as a stark contrast to Byron Scott's offense.

Marcus Thornton didn't get to the rim with the ball more often last season. He got there without it, and the offense made sure the ball found him. This is reflected in his %assisted stats. Of Thornton's 323 made shots at the rim, a whopping 197 of them (or 61%) were assisted by teammates. Monty Williams' offense rarely has Thornton receive the ball off a baseline cut to the rim. Instead, Williams asks Thornton to catch the ball in isolation situations on the perimeter. When Thornton has scored at the rim in 2010-2011, he's frequently done it without help. Of his 44 made shots at the rim this year, only 21 of them (or 48%) have been assisted. Simply put, Monty Williams has failed to understand one of the most critical components of Thornton's game, and Thornton is paying for it.

But what of Willie Green? Monty Williams has placed a tremendous amount of trust in Green, but is it warranted? Let's look at Green vs. Thornton, by category.

This was the "original" great equalizer- Green was supposedly so good at defense and Thornton so bad at it, that any disparities in offensive value didn't warrant consideration. Anecdotally and statistically, Green was an efficient defensive player through the team's first 15-20 games. In the last 10-15 games, that defense has (again, observationally) dropped off. He's been a poor isolation defender, and on a team that values defensive rebounding from all positions, he's been one of its worst D-rebounders.

Defense is, of course, notoriously difficult to measure. We can get into an "I say, you say" debate for hours and ultimately go nowhere. The few statistical methods we have can be misleading (sorry, I don't have Synergy data for this one). Nonetheless, we may as well look them over.

In terms of "counterpart production" statistics, I prefer Basketball Prospectus' dMULT stat to 82games.com's opponent PER. dMULT is essentially a measure of defensive performance as a function of what a player's opponent normally averages. If a player posts a dMULT of 1, he holds his opponent to exactly his season average. Below 1, he plays good defense, and above 1, he plays poor defense. Unfortunately, BP doesn't have dMULT stats for the current season. Here's how Green and Thornton compared in 2009-2010 by dMULT (higher is worse):

Those figures generally agree with the visual assessments of Hornet and Sixer fans- Marcus Thornton and Willie Green were poor defenders last season. 82games' opponent PER numbers this year (higher is worse):

Look, I understand anyone that seeks to dismiss a half season's worth of 82games numbers. Opponent PER is so, so difficult to measure accurately. We've all heard Monty Williams torch Thornton for his defense, and... not torch (douse in liquid?) Green. But there is evidence that the defensive gap between Thornton and Green isn't nearly as massive as Williams has alluded to, and that Green is overrated defensively. Not a single Philadelphia writer I've spoken to thinks Green did anything more than average defensive job for them in his seven seasons with the Sixers.

The clincher for me is the bench's zone defense. At any instant, two bigs could be out on the perimeter, a guard could be the only defender in the paint, or vice versa. It's the most fluid zone I've ever seen at the NBA level,and it's extremely conducive to hiding bad defensive players. The Hornet defense has been far more predicated on system than it has been on individual players, and it's why Thornton's benching for "defense" has been inexplicable to me.

But that brings us to...

Is Thornton Really Better at Offense Than Green?

So what's the issue? Green has played better offense than Thornton and has probably played slightly better defense. Why is this a debate?

The argument for Thornton can be summed up in one picture: 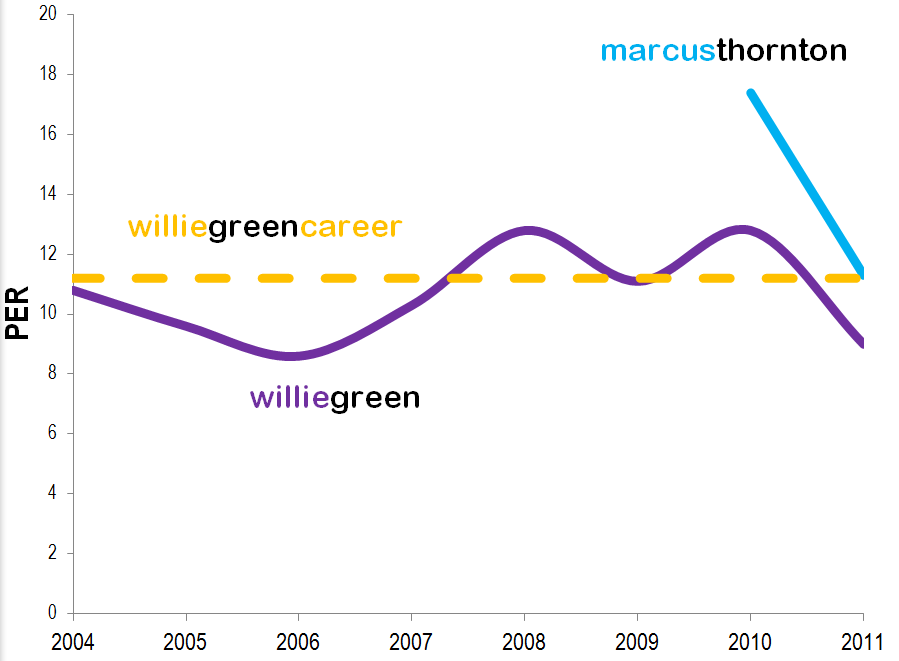 That's really it. Willie Green has been one of the NBA's least efficient offensive players for the last eight consecutive seasons. He shoots too often, he doesn't understand his own limitations, and multiple coaches have (wrongly) thought it in their best interest to continually give him minutes (and let's not get into "Philly made the playoffs and we sucked last year!" and conflate team results with individual ones). Marcus Thornton showed the ability, through 73 games, to be massively better than Willie Green last year. The complaints about his high usage rates can't be dismissed off hand. But they can't be framed in a negative light either, without simultaneous acknowledgement that Monty Williams has failed to employ Thornton nearly as well as Jeff Bower did.

Marcus Thornton vs. Willie Green isn't about their performances through 30 games as much as it's a question of the future. We know what Willie Green is- a low efficiency player that can be useful in specific defensive situations and that needs his shot to be created for him. We don't entirely know what Thornton is, but despite his terrible season thus far, we know that he's shown significantly more ability than Willie Green. That he's 23 and will hit the open market in six short months is merely the  gratuitous subtext.