I've just got a quick Staturday for y'all. Since this is autoscheduled into the future, the stats are behind by two games, but the overall points should still be valid.

One offensive flaw I've routinely pointed to is that of shot distribution. Especially early in the season, it seemed like good shooters weren't shooting enough, and bad shooters were shooting too often. The issue has felt less pronounced over recent games, but it still feels like it's somewhat prevalent.

Today's graphs explore whether this issue is more real or perceived. Do we think Willie Green and Trevor Ariza are shooting too much, or are they actually? And how do we quantify that? The first thing that jumps out? The distribution isn't that bad. David West and Chris Paul are our two most efficient scorers (outside of Gray, heh), and they also rank 1-2 in terms of possessions used. The guy that really stands out, of course, is Trevor Ariza. He's the most inefficient player on the team excepting D.J. Mbenga, yet he uses the third most possessions. While Willie Green has been highly inefficient for us this year, Jason Smith, Marcus Thornton, and Jarrett Jack haven't exactly lit it up (I know, I hear you on the consistent MT minutes deal. I'll revisit this chart through the end of January).

This next one is similar- it explores shots taken versus effective field goal percentage. 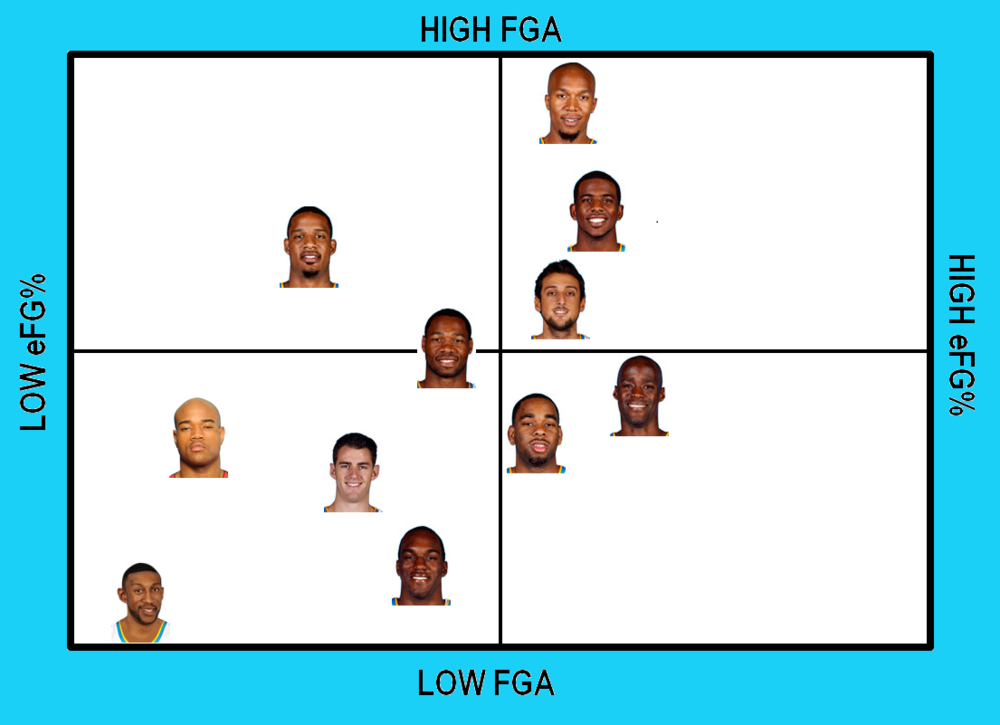 Some of the same aspects of the first chart are seen in this one too. Ariza's a terrible shooter, and yet he ranks third on the team on the FGA axis. Willie Green is worse at converting his shots than Okafor or Marcus Thornton and yet outpaces each of them. Granted, much of Okafor's offense comes in the context of other players creating around him, but that doesn't mean the imbalance is one that can't be minimized further.

In any case, it's pretty clear that D.J. Mbenga is the best part of either one of these graphs.