Share All sharing options for: Staturday: The Evolution of Darren Collison's Trade Value

Via Mike Wells of the IndyStar, we learned yesterday that while "the Pacers are not resting or relaxing until they find a veteran point guard," they've been told by New Orleans and San Antonio that Darren Collison and George Hill, respectively, are not available. While that may be a little surprising, it probably makes sense given all the rumors flying around Chris Paul this summer.

It's been my position for a while that Collison's current market value is a little bit higher than his actual value. Now that we know the details of the first concrete Collison offer, we can go back and re-evaluate that notion.

Darren Collison, you will all remember, started as a 21st overall pick. There was some chatter that New Orleans would consider drafting Marcus Thornton at that slot, but eventually Dimes was the selection. As people are so fond of saying these days, the draft is a crapshoot once you get into the high teens and twenties. Referring back to this post in June, we know that Collison's initial value (by virtue of being selected 21st) was an estimated 7.3 win shares over his first four seasons.

That works out to 1.82 win shares a season. To provide a frame of reference, Ryan Bowen produced 1.5 win shares in 2008 and Darius Songaila 1.3 in 2010. So let's mark that down as "scrub-ish player that kinda played a role and that we all sort of enjoyed seeing perform scrub-ly duties." That's the sort of player you're almost hoping for with the 21st overall pick. It's not what we got in Collison.

In 2009-2010, Collison posted 2.9 win shares over just 2109 minutes. If we extend his time on the court to what the average starting point guard in the NBA might play- let's eyeball it at 2500 minutes or ~30 minutes a game- we arrive at 3.4 win shares over a full season. Essentially, Collison outperformed his average draft spot by almost an entire 100%. The four year projection for a 21st pick of 7.3 win shares would be blown away by Collison if he started for four years at 13.6 win shares. And that's assuming no improvement or regression. There's a very real chance Collison could become a 15-20 win share (4 year sum) kind of guy by 2014.*

NewOrleans.com (which has really stepped up its coverage as of late) reported on Thursday that the Pacers had offered the 10th overall pick of the 2010 draft (eventually used on Paul George) for Collison. Again, referring back to the June Staturday, that pick would have an estimated value of 12.0 win shares over a rookie's first four years under contract. If only there was a way to visualize this.. 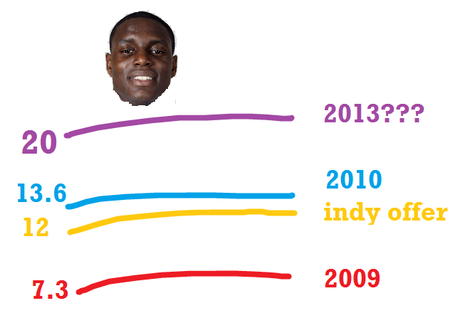 So there we are. Unless Danny Granger is involved, it doesn't make much sense for New Orleans to move Collison to Indiana. And it doesn't make much sense for Indiana to move Granger anywhere really, considering that Granger is essentially their (much better) version of Collison. Danny Boy (sorry, MS Paint apparently gets you higher than real life paint) was picked 17th overall. 17th picks project out to 8.7 win shares over their first four years. Granger in his first four seasons? 26.9. He is fantastic, and as much as overzealous Hornet people would like to sell the "but look, Paul George is the exact same player! Potential All-Stars are way cooler than Real All Stars!" angle, I don't see it happening.

But anyways, it appears New Orleans has been wise to sit on offers for Dimes for now (assuming nobody else was offering much more than Indy). I still think Collison's being slightly overvalued at as a 3.75ish win share player (15 WS to keep consistent with the... infographic), and there's always the chance he regresses as a player in 2010-2011. Either way, Dimes has come a long way and hopefully continues his meteoric rise in a Hornets jersey. Failing that, here's to hoping we rip someone off.