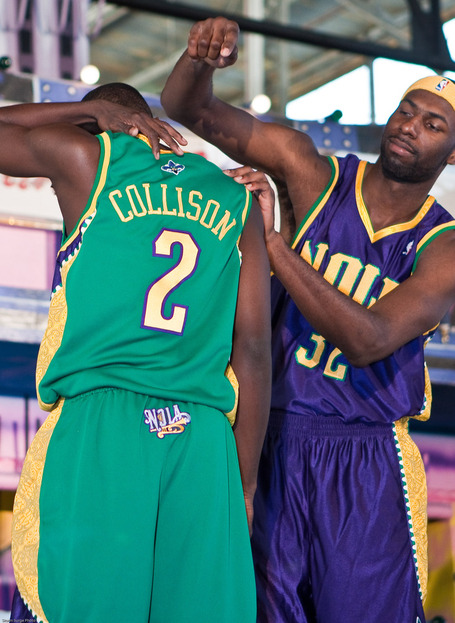 Thanks to Storm Surge Photography for the awesome picture.

For the purposes of this story, I'll treat the 4-team deal and the Toronto deal as one. They overlap in some ways, and they do complement each other. So first, the trade:

It's clearly a swap of young guys with potential. Even Ariza, who joined the league in 2004 and has played for four teams, is only a year and a half older than Darren Collison.

Who is the best player in the deal?

Collison, easily. As much of a role as Ariza played in the Lakers' Finals run of 2009, he showed in 2010 that he couldn't handle higher usage rates. Collison, on the other hand, pretty easily took on 23.1% usage (2% higher than the 21% Ariza struggled with last year) and posted far better efficiencies. Collison is also younger and is more likely to improve in the short and long term.

Indiana gets their point guard of the future in a great deal for them.

Where does Ariza fit?

At first glance, Ariza's addition doesn't fit well with the arrival of Quincy Pondexter. But with James Posey and Julian Wright both gone, the Hornets' SF rotation actually gets cleaned up a little. Darius Songaila will likely see a fair amount of PF minutes again, meaning Pondexter, Ariza, and Peja Stojakovic will comprise the three-man SF rotation.

Ariza is a perfect fit in the starting lineup for Chris Paul. He can play off the ball effectively (though his three point shot is widely overrated). The Hornets' transition game should continue to pick up too with Ariza's addition.

Perhaps most importantly, the Hornets get their new perimeter stopper. According to Basketball Prospectus, Ariza limited opposing players to 87.8% of their average game-to-game production last year over 1067 defensive possessions. As a point of comparison, James Posey allowed opponents 22.3% more production than average, over 666 defensive possessions. Ariza will certainly be guarding the other team's best player every night.

Where does Belinelli fit?

Monty Williams mentioned the need for a shooter at off-guard last month, and that's exactly what Belinelli is. Belinelli won't pass, rebound, play defense, or really do anything else.. but he will shoot. At 38.8% over a three year career, Belinelli will space the floor for CP.

Honestly, I wouldn't mind him starting, either. Offensively, a CP/Belinelli/Ariza/West/Okafor mix looks good on paper- Belinelli spreading the floor, Ariza running into space, West floating on the elbows, Okafor anchoring the middle, and Paul creating for them. As I've said before, I'm a fan of bringing Marcus Thornton off the bench (not because he's "not starter-worthy," but because putting quality players on the second unit is an underrated coaching tactic that we've seen work brilliantly in Los Angeles (Odom), San Antonio (Ginobili), and Dallas (Terry)). Defensively, it could work too, given that (a) very few teams have two quality wing options and (b) Ariza would cover the primary option.

What does this mean for Chris Paul?

A lot of people (me included) assumed that New Orleans wouldn't move Collison as long as the uncertainty surrounding CP3 lingered. I don't believe anything has substantially changed regarding Paul's long-term outlook in New Orleans. This seems more a case of Dell Demps gambling that these moves will keep Paul happy and make the team better.

As I've noted so many times, I'm a huge fan of Collison. I think he was one of the NBA's top 5 rookies last year (better than S. Curry), and I think he can develop into a fringe All-Star type of player. The prorated Win Share projections I discussed in last week's Staturday support his future potential. But in New Orleans, his production will always be limited by Chris Paul's presence. Playing a two-guard look or a three guard rotation would not have changed that. Collison would never have been as valuable to the Hornets as he will be to the Pacers.

The Hornets traded two backups for one starter and one potential starter. Time for some back of the envelope estimates.

Trevor Ariza's role in New Orleans will be very similar to his role with the 2009 Lakers, when he posted 2.5 offensive win shares over 82 games at 24.4 minutes a game. Assuming his minutes increase to his 2010 Rockets minutes, but his role reverts to a non-primary scorer one, 3.5 offensive win shares is a solid, conservative estimate of his value to the 2010-2011 Hornets.

Likewise, James Posey contributed 1.0 offensive win shares last year, probably a similar figure to what he would have posted in New Orleans next year.

It's worth noting that this doesn't account for changes in Chris Paul's, David West's, Emeka Okafor's, or the bench's production, due to the roster additions. I'd expect Belinelli's arrival to ease Paul's transition back to one of the league's top 3 players, while I'd expect some of the bench's play to decline with Collison's departure. Overall, only looking at the offensive side, the team is 1-2 wins better.

Defense is obviously a tougher question to tackle.

I called Ariza the team's "new" perimeter stopper, but the team actually didn't have one last year. How much of an improvement does that make? Darren Collison was an adequate defensive player, but again, there's only so much impact a backup can make. Julian Wright has always had the physical tools to be a good defender, but he's never put it together. And while Belinelli is a subpar defender, the team will do their best to hide him on that end.

Overall, Ariza should be a key piece in Monty Williams' attempts to re-tool the defense. The Hornets' post defense was abysmal last year, but much of it was due to the team's inability to prevent penetration. There's no question this trade improves our defense. But by how much?

If we look at it simply from the perspective of trading two backups for an elite perimeter defender, I wouldn't be surprised if the team improved 2-3 wins solely from a defensive perspective. But again, this is all very difficult to quantify. Most importantly, between Chris Paul and Trevor Ariza, New Orleans now has two of the most accomplished perimeter defenders in the NBA. That will only serve to improve David West's and Emeka Okafor's defensive performances next season.

For the second straight offseason, New Orleans adds a contract that extends through the 2013-2014 season. However, Ariza's contract is far less imposing than Okafor's. He's owed around ~7 million dollars for each of the next four seasons; all in all, that's a reasonable amount of money.

This means New Orleans is almost $3 million under the cap.

The Rest of the Summer

The Hornets currently have eleven players under contract. Even if they go into the regular season with their customary 14, they'll need to pick up three more players over the next couple months.

The obvious need position is backup point guard. I'll break down some of the options there later this week. The second need position is likely another off guard, and the third need is a taller big man. Darius Songaila is less expendable today than he was yesterday; couple that with the fact that no remaining FA is worth anything remotely resembling the mid-level, and it's clear New Orleans won't be spending too much to fill those three positions.

The team got better, no question. Collison/Posey/Wright for Ariza/Belinelli should produce anything from a 3 to 6 win (positive) swing. For a team that almost reached .500 last year and that brings back Chris Paul, 50 wins should now be the floor (it was certainly within reach, pre-trade). New Orleans added an young, athletic wing player and a young shooter for expendable pieces.

Overall, I'm still not as satiated as some. Maybe I'm too tough a grader, and maybe my trade expectations were unrealistic. At the end of the day, I simply expected more for Darren Collison. I thought his value was higher and that Trevor Ariza's, after an underwhelming first year in Houston, was lower. The fact that Houston received nothing more than Courtney Lee in the transaction is pretty telling.

Nonetheless, Dell Demps' first move was a good one. As many of you have pointed in the comments, getting fair value for Collison when everyone in the league knew New Orleans would have to move him (or Paul) was probably impossible.