[Back to back front paged FanPosts? Yes! Another really good post, this time by MrWayneKeller about JuJu and Summer League. I'm hoping to be in Vegas for at least one of the two upcoming weekends, so hopefully much more reporting come up. Personally, I'm pretty disappointed Julian won't be out there, with Pondexter sure to challenge him for a role on the team in the fall. -atthehive]

Let's be honest here, we all love Julian Wright. We all remember that game in 2008 against the Nets when he replaced Peja Stojakovic and looked like a fixture for our future for years to come. Ever since his rookie season in 2008, when everything seemed so perfect and ideal in Hornets-land, we all had high hopes for "Juju" and, more importantly, we all cheered for him to succeed. The fans wanted nobody to succeed as much as they wanted Julian Wright to. But it hasn't happened. Wright showed flashes the last couple months of 2008, had high hopes for 2009 and struggled to even crack the rotation. All seemed to be forgiven when he was basically given a spot in the starting lineup this season, only to see that experiment fail six games into the season.

But with the new regime coming in, a lot of us had hopes that Williams could work his magic on Julian Wright and we all held out hope that he could possibly earn that spot in the rotation again and finally harness all that talent that made us love him in the first place. But now it looks as if that's no longer the case. 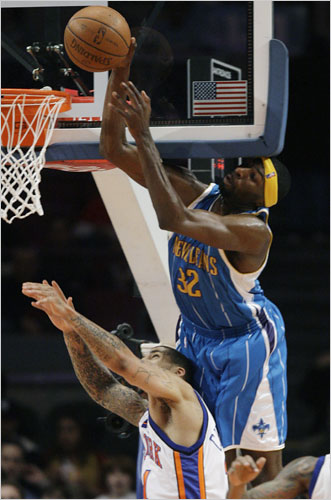 Julian Wright hurting himself some more.

The Hornets summer league roster was announced today and Julian Wright, for the first time since 2007, will not be joining the Hornets summer league team in Las Vegas. It shouldn't come as much of a surprise to some, as Wright mentioned on the Hornets official website at the end of the season that he was going to pass on participating in the Summer League because "summer league is so scoring-oriented. I'm going into my fourth year, and it's not all about me going out to get buckets. But that's kind of what summer league is about, being aggressive all the time and scoring."

While I do kind of see where he's coming from and would probably agree with that assesment, Julian Wright is not doing himself any favors. Coach Monty Williams strongly urged Wright to go back for a fourth summer leage appearance. Wright, true to his word, decided against it and insisted on not participating in the Summer League. I don't think he's in a position of job security where he can make that kind of decision and be confident with his spot in the rotation next season. I don't think Williams is the kind of guy to throw Wright in the doghouse because of this, but Wright could have done himself a lot of favors by appearing. He's already receiving backlash from local publications for his decision not to join the team, and I think this is an indication of his days being counted down in the Big Easy.

We all love Julian Wright. I was strongly encouraged when he was there to greet Monty Williams during Williams' introductory press conference and looked at it as a sign of Wright turning the page. I was strongly encouraged by Wright's talents and Williams' track record that something could be reached to where Wright could still flourish with the Hornets. It no longer looks like that's the case. The selection of Quincy Pondexter in the first round creates a huge logjam at Small Forward. Even though the team would prefer to probably move James Posey's contract, it's much more likely that Julian Wright is to be moved this offseason than Posey. Some team may still take a chance on Wright's talents and the Hornets could always save cash here and there. So in order to assure his spot with the team next season, Wright could have went to the Summer League and impressed Mike Malone, who's said to be caoching the team. But instead, it doesn't look so good for Julian Wright ever playing another game for the Hornets. He's certainly not doing himself any favors.