[Promoted from the FanPosts. I haven't written specifically about the various Chris Paul trade rumors, but they're certainly swirling madly, and we've had good discussion about it in the comments. (Which, reminds me, I should mention, y'all have been on fire with the comments. Serious.] Anyways, this FanPost from Grayson addresses it pretty head on. Well done, sir. -atthehive]

Chris Paul trade rumors, well they are just that, rumors. As defined by the Macquarie dictionary:

n. 1. a story or statement in general circulation without confirmation or certainty as to facts

These are all in my view plain speculation fuelled by a free agent frenzy that the beloved ESPN media has created. Fact is this free agent period has been quite anti-climatic and with only 4 viable big name free-agents many teams looking to contend look elsewhere and this is where Chris Paul comes in. All these Orlando, Portland, Nets and other fans really need a reality check when proposing any trade for Chris Paul. 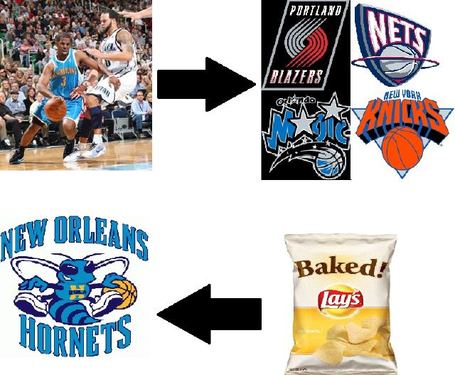 Such a great trade. Let's do it. (Chris Paul to either Portland/New Jersey/New York/Orlando for a bag of potato crisps, great deal in my view...note sarcasm)

For many teams and their fans there is a generalisation that is reached and a certain false perception on New Orleans.

The team is in a small market therefore they cannot win championships.

This is utterly false. Need you look no further than the Saints, San Antonio Spurs and others?

The Hornets are in a financial stranglehold

False, it's true that the ownership transition has reached a stand-still but by no means does that mean the organisation is scrambling to make end's meat. I'd figure the Mo Pete trade would shut up a lot of these meaningless trade rumors but I was proven wrong. The Hornets are now right at the luxury tax line so it kind of puts to rest these implications of the so called "Hornet salary debacle."

Wrong again, the Hornets already having several expirings in Peja (15 million), Songaila (4.8 million) and West's opt out could be considered one as well (8.3 million). The free-agent clear out by teams like the Knicks, Heat, Bulls etc has already been done well before this offseason so if the Hornets want expirings for a worse Free-Agent class next year it makes little sense.

The Hornets are going to be in trouble under the new CBA.

Well false again if you look at point 3 because the Hornets salary will be below the estimated 61 million hard cap in upcoming seasons so that kind of puts to rest those theories and stupid lines of thinking. A hard-cap is most certaintly going to be instituted and will raise the salary cap from 58 million but will lower the soft cap from 70 odd million.

Chris Paul doesn't want to be in New Orleans he wants to be with his bud Lebron.

False, about Chris Paul wanting out of NOLA. He has never said he wants to leave New Orleans. The only time he mentioned the possibility of him leaving was if the Hornets organisational direction was not one headed for a championship. As for Paul wanting to play with LBJ I am sure it is true. However who's to say Lebron doesn't resign with the Cavs and keeps pluggin' along with them? As well I don't necessarily think Paul and Lebron would work well together as both demand the ball and Lebron is pretty much a point forward.

Dude my collection of acorns for Chris Paul! It's totally fair!

Yea I'm sorry all you non-hornet fans out there this 'aint your little brother you can severely short change.

Chris Paul is one of the top 5 players in the league and it seems to me that many of these fans are severely undervaluing Paul's value thinking they can get rid of a bunch of old, no-potential expiring players. Going into this offseason I thought there would be more Collison rumors than Paul, but the devine wisdom of ESPN has intervened and cited no sources to back up any of their information in their wheeling and dealings.

Unfortunately it is their audience that buys into any of the speculation they spew out and it becomes a snowball effect where it just gets bigger and bigger and the only way to stop it is one of three things.

1.     The front office plainly states they are not trading Chris Paul.

2.     The Ownership of Gary Chouest is officially announced.

Point 1 has already kind of happened with Shinn coming out and saying in plain English that the Hornets are not trading Paul. This hasn't deterred any of the large media outlets from continuing to dribble out a bunch of crap that they have not cited effectively negating any official statement the teams makes.

However it is point 2 that I believe will finally shut all these things up. If Chouest comes up, is introduced, makes a statement saying he wants to bring championships to New Orleans now, as well as keeping Chris Paul for the long term then maybe, just maybe people might realise that Chris Paul isn't leaving New Orleans for cheap crappy players.

Point three really addresses the media directly. Winning solves everything. I know it's far to early to reach expectations and make predictions but if the Hornets just play winning basketball this season (with Chris Paul) then ESPN, TNT, Yahoo.com and others will all shut up. Yes this is a business, but many need to be reminded that this is a basketball business and if your team is winning then I can 100 percent guarantee your team will be profitable (just look at 2007-08).

I guess at times like this all you can do is laugh.