Share All sharing options for: Recapping the Draft: Welcome, Quincy and Craig

Wow. Was that a roller coaster, or what?

It started rather inconspicuously: John Wall at #1 to the Washington Wizards. There was the expected video montage, the expected polished interview, and so forth. Evan Turner at #2. Again, no shocker. Derrick Favors at #3 raised a few eyebrows- New Jersey's continual praise of Wesley Johnson turned out to be one enormously well executed smoke screen. Not everyone was convinced though, as Yahoo!'s A-Woj would later tweet, "A fantasy about a package deal of Wes Johnson and free agent Carlos Boozer had been thrown out, and Nets were amazed at how many bought it."

The Favors selection allowed Minnesota to get its target- Johnson- at #4, and Sacramento to pick up a tremendous value in DeMarcus Cousins at #5. From there, Ekpe Udoh, Greg Monroe, and Al-Farouq Aminu were all slotted in, leaving Ed Davis the odd man out. As everyone predicted, pick #9 would be where things got interesting.

Utah opted to go with Gordon Hayward instead of Luke Babbitt, two players New Orleans was reportedly considering at 11. When Indiana selected Paul George at 10, the three players atop the Hornets board- Cole Aldrich, Patrick Patterson, and Xavier Henry- were all still available. We can start to piece together what transpired exactly at that point.

A report before the draft indicated that Oklahoma City offered the 21st and 18th picks to New Orleans for the 11th pick. The Hornets turned them down, indicating that they were at least a little interested in taking one of Aldrich, Henry, or Patterson.

Right before the Hornets' pick came up, A-Woj noted that New Orleans was deciding between Henry and Patterson. I know his latest Chris Paul rumor-fest article rubbed a lot of people (including me) the wrong way, but the fact is, he literally nailed every pick, every rumor, every discussion that happened tonight. The fact that New Orleans took Cole Aldrich at #11 was surprising. The explanation came quickly- the pick was actually made on behalf of Oklahoma City.

It's not too difficult to see what happened there. Having had their initial offer rebuffed, OKC sweetened the deal for New Orleans- they agreed to take on a bad contract (in this case, Morris Peterson) as long as they kept the 18th pick and dealt the 26th. Presented an opportunity to get under the cap immediately and avoid paying the rookie scale contract for a lottery pick, the Hornets jumped at it. Which led to this: 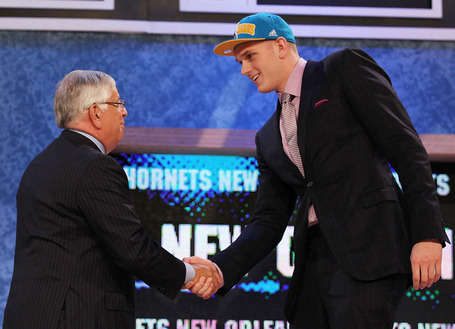 Then began the long wait for the 21st pick. There was initially some confusion about who owned the 18th pick, which OKC had initially offered. Compounding matters was the fact that the 18th, 21st, and 26th picks were officially announced as Thunder selections, the latter two on behalf the Hornets. As ticktock6 (who had a very busy day on Twitter) noted, the Hornets' draft party mistakenly had the 18th pick going to the Hornets, even after it was made. The Thunder took point guard Eric Bledsoe with the pick, which of course prompted a whole new flood of "Chris Paul's gone!" rumors. For some strange reason, the Vince Carter and Jameer Nelson for Chris Paul rumors came back in full force, despite the fact that it was the most ridiculous of all the concocted trade rumors.

At this point, New Orleans had traded a #11 pick and Mo-Pete's contract for a #21 and #26. Peterson had an expiring 6 million dollar contract in 2010-2011. The immediate tendency is to think that an expiring deal as large as Peterson's could have been moved, with relative ease, at a later date. This may have been true, but it's also important to note that there are many large, expiring deals in the NBA this year. With New Orleans 4 million dollars above the tax line, the move immediately placed them below the limit.

I was happy with the Hornets' moves until this juncture- saving money and cap space to spend as an exception on a free agent, and getting two first rounders instead of picking at eleven (where, as I noted yesterday, none of the prospects really jumped out at me). Then, this happened: 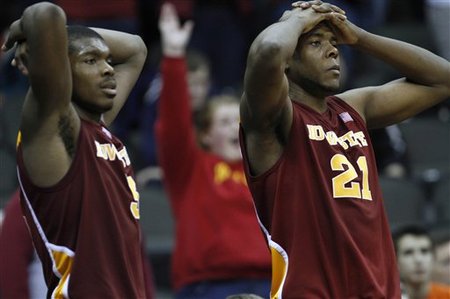 I'll be honest. My first reaction was one of absolute horror. I knew very little, if anything, about Craig Brackins. But a quick perusal of his stats quickly bludgeoned any hope I had. 22 years old. 6'8.5" without shoes. 42% from the field as a senior. Lower rebound figures than a guy I wanted at small forward, Damion James. Draft Express pegged him as an early second rounder. The fact that Aldrich, a terrific rebounder, had donned the Hornets cap a mere hour earlier made the pick seem infinitely worse.

A little research paints him in a better light, but not by much. Both ESPN and Yahoo! Sports had Brackins going 20th and 22nd respectively. Brackins posted enormous usage rates in his freshman, sophomore, and junior years, worked hard for every shot, and very rarely got easy buckets from his teammates. I'll withhold full, official judgement until we write our first complete Brackins analysis. But the fact that his efficiency declined in his junior year with lower usage rates (contrary to what most Brackins supporters claim), that he's a finesse guy, that he's an awful offensive rebounder, and the fact that, according to Draft Express, "Brackins looks most comfortable letting his man push him out to the perimeter," are extraordinarily troubling. I absolutely hated the pick when it was made; I don't hate it as much now, but I still don't like it. 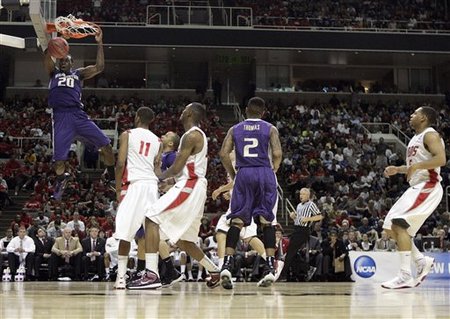 Thankfully, New Orleans picked up a solid player in Quincy Pondexter at #26. Pondexter is old too, at 22, but he does bring enormous skill. Draft Express ranked him as the third most efficient scorer in this class, the fourth best jump shooter, and the second best isolation scorer. He brings great size for a wing, rebounds very well for his size, is a creative scorer, and turns the ball over rarely.

And please try and tell me this DX blurb doesn't excite you: "Defensively, Pondexter has continued his great play all season, showing outstanding versatility in man-to-man defense, good fundamentals in the post and on the perimeter, while also showing very good rotational awareness, being a vocal leader for the Huskies’ defense. He’s not the biggest or strongest player you’ll find, as definitely projects as a small forward defensively in the NBA, having nearly ideal physical tools otherwise for that role, but also possessing the versatility to defend multiple positions, along with a high level of focus and effort."

I loved the Pondexter pick when it was made, and I love it more by the minute. Go and read this article about his father, Roscoe "Bonecrusher" Pondexter. Quincy is absolutely fascinating, and I'm looking forward to analyzing him and breaking him down further. We'll have much more statistical ponderings in the following days, but for now, I'll leave you with this:

Those are senior year stats for both guys. Offensive rebounds, defensive rebounds, and free throw attempts are pace adjusted per 40 minutes. Let's also toss in DX's analysis of Patterson as a defender: "His awareness is not stellar, oftentimes falling behind on defensive rotations and losing his mark. He still has trouble closing out on perimeter oriented big men, which is a concern considering the nature of the power forward position at the next level."

Patterson at 11? Or Pondexter at 26 at 26 money, plus dropping Mo's contract, plus rolling the dice on an a guy I don't like, but that even I'll say is one of the most offensively talented big men in this draft?

This draft will have its share of detractors. Absolutely it will, and I see the rationale. But keeping in mind that New Orleans was never going to take Aldrich at 11, arguments that the Hornets "really could have used Patterson" are mostly rendered moot by the Pondexter pick. I still can't shake the feeling that New Orleans missed out on an opportunity by drafting Brackins. But you know what? We got a player I feel terrific about and one I'm willing to give a chance.

The first draft of the Chouest Era is in the books, and oh, was it memorable.