Staturday: Where Does Kobe Bryant Rank All Time?

Share All sharing options for: Staturday: Where Does Kobe Bryant Rank All Time?

The obvious story around the NBA this week- so obvious that the ABC guys were talking about it at halftime of Game 7 of an NBA Finals.

Kobe Bryant has won 5 Finals, one less than the unanimous G.O.A.T., who won 6. Team wins, as we've said here so many times in the past, are too often conflated with individual success. And so there will always be those who consider Kobe and Magic equal (they both have 5 rings!) and Kobe on the same level as Jordan. Honestly, I don't want to argue with those people. Team wins provide a method to rank players- a simplistic, lazy way to do it, in my opinion- but a method, all the same. "Scoreboard" is a retort that simply isn't about to go away any time soon.

As Neil Paine writes in this terrific discussion about the best Laker of all time at Basketball Reference, "Winning a ring is the ultimate team accomplishment, but we have much better ways to parse out player contributions than to lazily took at championship totals and blindly base our evaluations on them alone."

So how does Kobe Bryant rank in terms of the individual statistics that we know correlate well with winning? Is he a top 10 player of all time?

Let's start with a broad, cumulative statistic- Win Shares- and see how players rank across the board, before delving into component statistics. As always, a good statistical analysis is never one size or one stat fits all.

This table is sorted for career Win Shares. Click on a column header to sort by that statistic.

More than anything, this table reminds us just how great some past NBA HOF's were. It's easy to get caught up in Kobe's current greatness (in my mind, the greatest shot-maker in the history of the sport) and forget how awesome his predecessors were.

The longevity of Kareem and Karl Malone is absurd. Sort by WS/season; Jordan and Wilt Chamberlain blast away their competition. It's plain to see that if Jordan hadn't decided to retire every other year to play golf/"play" baseball/make underwear commercials, he could have absolutely blown Kareem away. Jordan played more than 550 fewer games than Kareem, and many of those came in the prime of his career. Simply giving him a full 1993-1994 and 1994-1995 catapults him over Wilt for #2. Given the fact that he posted 15.8 WS in his final- and "bad" by his standards- year in Chicago (higher than Kobe Bryant's career best, for what it's worth), it's crazy what his total could have been.

Of course, these tables don't tell the whole story. The goal of every team, every year is to win the NBA Finals. And while not every player is lucky enough to have great teammates season after season, most of these guys went to the playoffs quite a few times.

So the greatest playoff player in league history is Jordan, despite the fact that he barely cracks the top 10 in total postseason games. That's pretty impressive. Magic Johnson and Jerry West were also really, really good playoff performers, which again, should come as absolutely no surprise. And it's interesting to see Utah's championship-less duo of John Stockton and Karl Malone way down on the WS/g list.

Kobe Bryant does crack the top 10 in cumulative playoff win shares. But this is largely fueled by the fact that he's played in the third highest amount of postseason games ever, ranking behind two Lakers- Kareem and Shaq. WS/G shows that Bryant is nowhere near the Magic/Duncan/West range in per game production in the playoffs. He's simply been there a lot and been pretty good (relatively speaking, of course, because "pretty good" on this list essentially means Hall of Fame good).

The above charts don't paint Kobe's career in the greatest of lights, relative to NBA Hall of Famers. But the fact that Kobe started his career at age 18 gives him a significant advantage. We can visualize this through cumulative WS charts. First up: Kobe vs. Jordan vs. Bird: 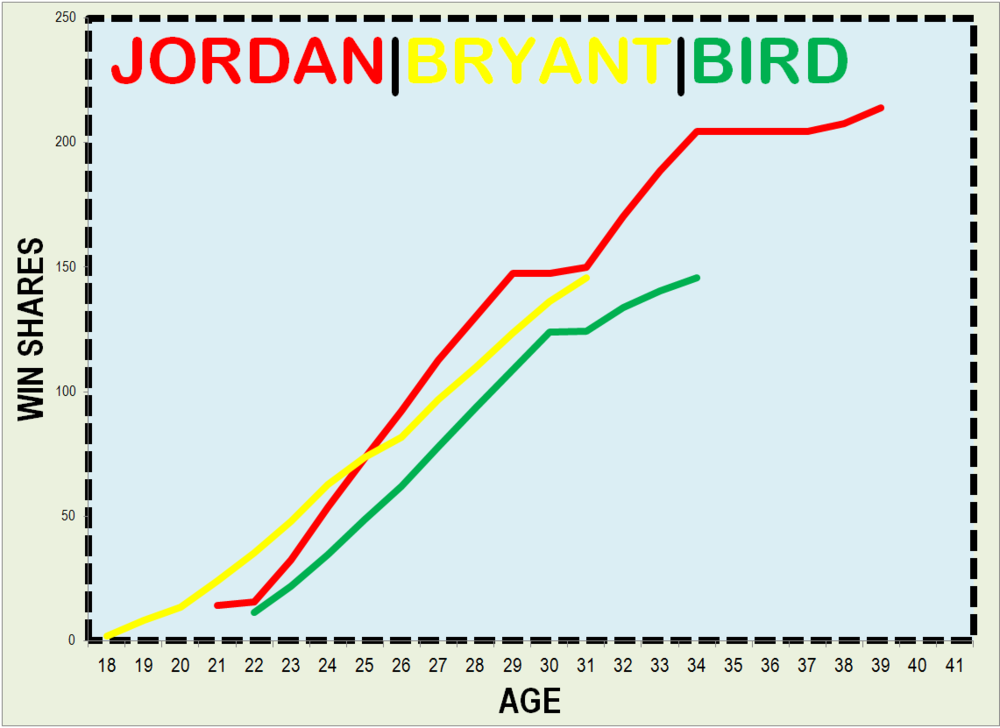 This is a little surprising, to say the least. Kobe's very nearly Jordan's equal at this age and is significantly better than Bird. Obviously Jordan taking an entire year off, and playing 17 "meh" games the next year is what enables Kobe to reach him at all. But the fact that they're so close is rather interesting. Next up, Laker legends: 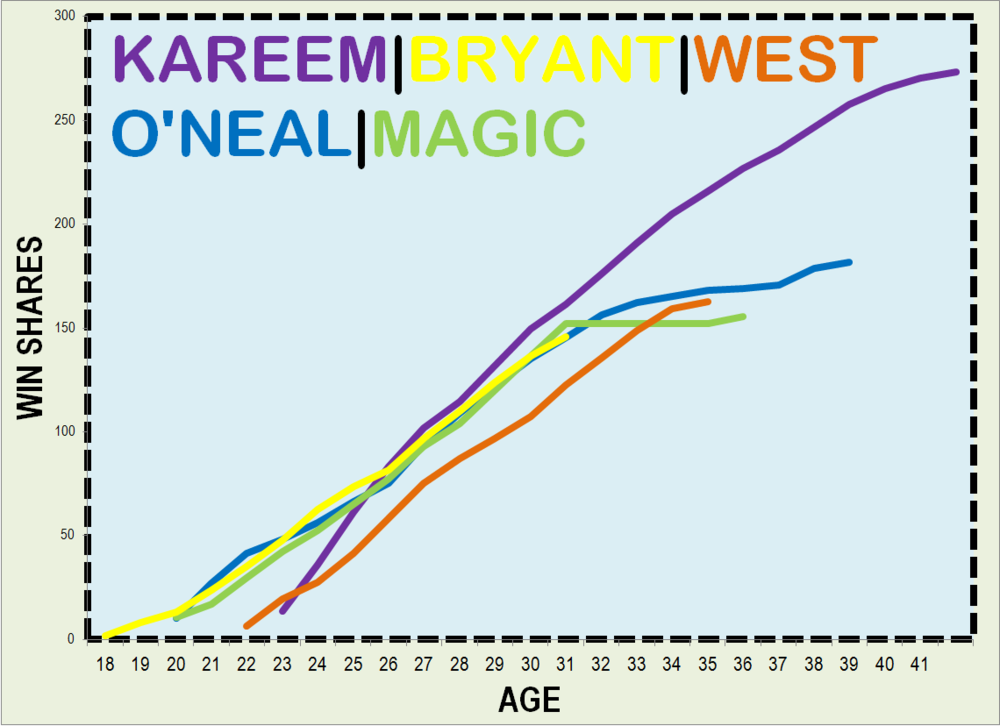 More good news for Bryant. The first thing that pops out in this chart is Kareem's career- the fact that he started so late is remarkable, and his late 30's are truly Bondsian (minus the steroids, hopefully).

Also of note: Kobe is now the same age Magic was when he retired for the first time. He's essentially equal in Win Shares, he's equal in titles, and looks virtually a lock to pass Magic when all is said and done. To some, that will come as blasphemy. Magic was probably the most unique player in league history, but the length of his career doesn't help him. Finally, check out the Shaq vs. Kobe lines. Creepily similar, right?

Kobe vs. some of the all time bigs: 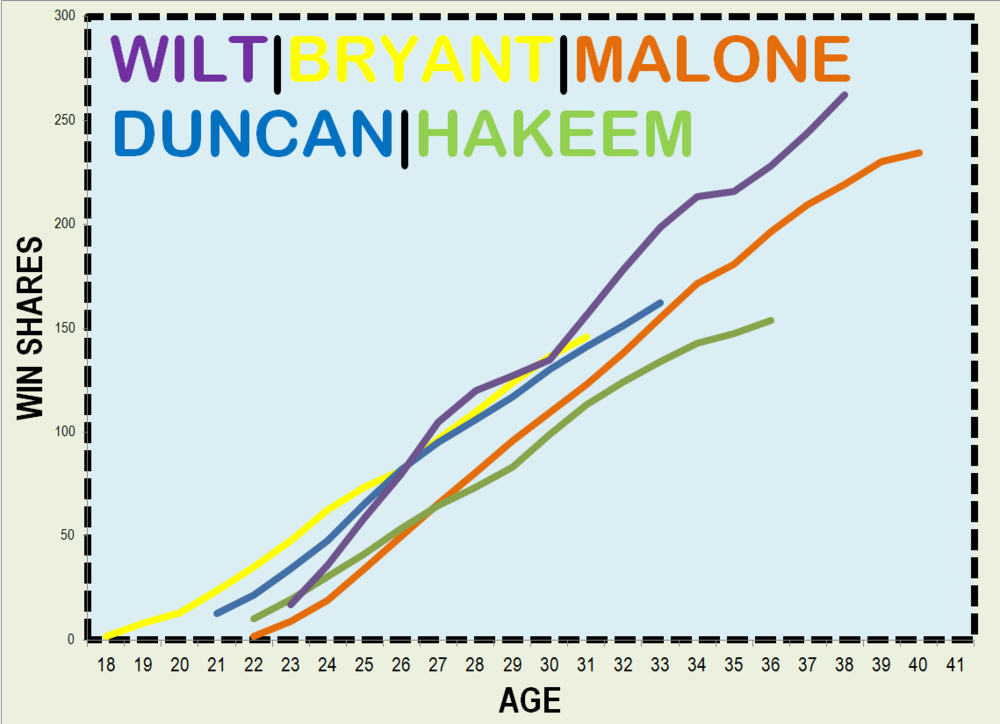 Kobe and Duncan will go down as the two greatest players of their generation, and this graph lends credence to that. In my mind, Kobe has a better chance of aging gracefully than Duncan. He's shown again and again that he can reinvent parts of his game as his physical tools diminish. Some (most? all?) of Malone's late career dominance must be attributed to John Stockton. The fact that his point guard could routinely get him buckets as his individual scoring ability waned allowed Malone to thrive in his later years.

And finally, Kobe vs. the next generation: 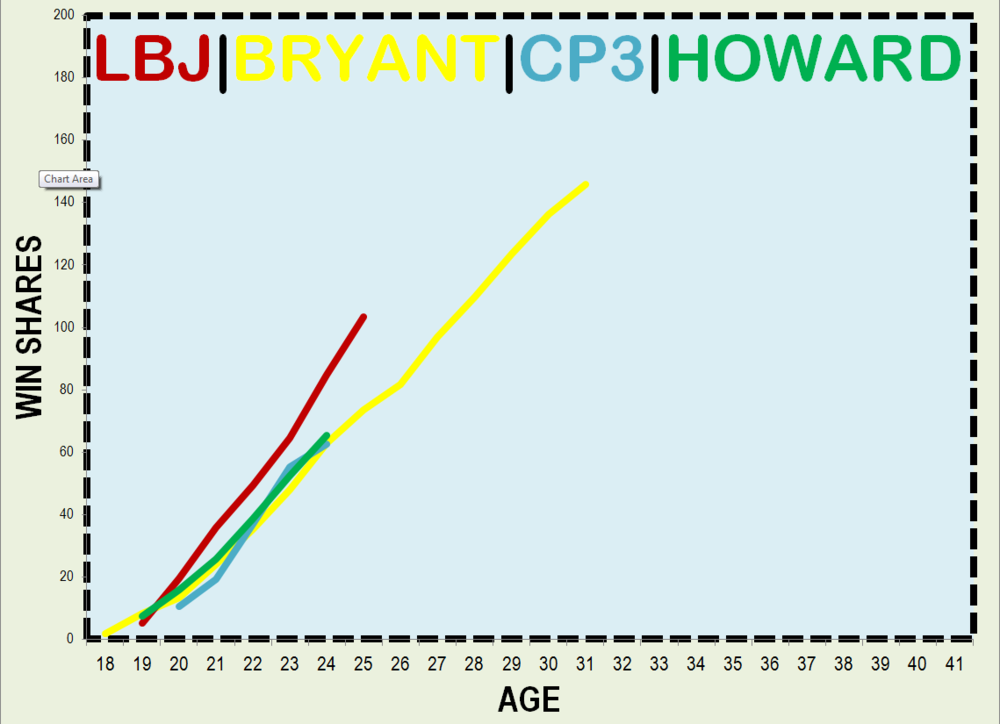 Chris Paul has a one year disadvantage relative to LeBron and Howard, and a two year disadvantage relative to Kobe, but he's held his own. Obviously, this last chart is more frivolous than anything else, since Paul, Howard, and James still have a long, long way to go. Still, LBJ's dominance is absurd. He's hands down the greatest 25 year old in the history of the sport. Whether his game can hold up the way Kobe's has is debatable, obviously.

Kobe Bryant-MJ comparisons are silly. Kobe Bryant-Greatest Laker Ever statements are silly too. The tables tell us that much. But the charts also tell us that those observations don't make sense for now. As it stands now, Kobe Bryant is a fringe top 20 player. And as much as it pains me to say it as a member of the International Society of Laker Haters, if Kobe can keep up his current pace into his 30's, he could easily finish as top 10 all time.