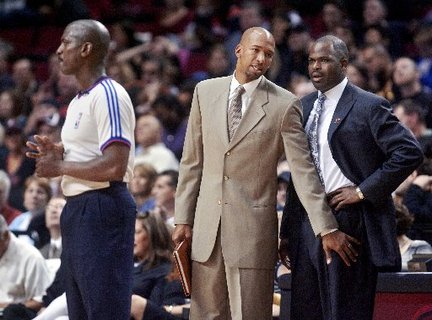 "Stay back Nate, I think I'll take over now."

The 2009 season was a long one for many Hornets fans as injuries seemed to be all to prevalent within the team. It seems at current that the Hornets are a far distant from the once famed 2007-08 team. However, with each passing year every Hornet fan waits in anticipation for both health and performance to merge into success.

With that comes a new head coach, new owner and a new team direction.

Under Byron Scott (in 2007/08) the Hornets were viewed as a methodical, defensive gritty team that lacked any third firepower outside of Paul and West.

Two season on and the Hornets still seemingly lack that third firepower at the wing position.

However, with the additions of Thornton and Collison a once shallow backcourt has turned into shining beacon of promise. As well the Hornets have exchanged one injury riddled big-man for a more consistent on-court performer in Okafor.

Breaking down the Hornets direction for not only this season but in the seasons to come is vital if we as fans are to grasp our expectations and position them thus.

Monty Williams seems to be the ultimate definition of a workman's coach. He will push you, guide you and develop you to reach your upmost potential. Having Williams run the show is not without its uncertainty as many had never heard of the guy outside of the coaching circles. With Chris Paul's sealed stamp of approval before a hiring was even announced it seems that the players may be willing to not only listen but work for their new coach.

Julian Wright's presence at the Head Coaches introduction cannot be understated. Julian has never seemed to grasp his potential that many had hoped for. His offense has been chaotic at the best of times and his discipline has been missing. Coach Williams is notorious for his ability to develop players, "I feel like my best asset is communication." This attribute I believe may install JuJu to finally make some strides into becoming a more complete NBA player.

Many have to remember that Julian is only 22 years old. Sure he's had 3 seasons in the league, but if he can develop some kind of discipline and capture a warrior like mentality on the defensive end I still feel like he can become a healthy contributor for this team. Added is the fact that he never won the approval of his head coaches (Byron Scott and Jeff Bower). Despite them giving him the opportunity I believe it was their attitude towards Julian that hindered his development. Hopefully with Monty as coach he can become a more controlled but still confident player.

In terms of coaching philosophy Williams states that, "We want to play as a unit we're not going to do anything separate and it's my job to keep everyone together." He goes on to say, "Offensively we want to play fast yet play inside/out."

What this says to me is that when the time is right, push the ball but we need to give it to our big man (West) and give it to our PG and play off of them. While that sounds good and where it seems we could go, what I am really enjoying hearing is how he wants "to play as a unit." The Hornets need to do this if they are to improve where they seemed highly vulnerable, defense. Monty describes what many are thinking, "Defensively, we have to become a better defensive team from the outside/in. I've said this before, David and Emeka have gotten a lot of flak for giving up post point [points in the paint] not necessarily the case in my view. I think that defense starts with ball pressure and keeping that ball out of the paint."

It's interesting to note a few things

1. He contrasts offense and defense as Inside/Out to Outside/In respectively.

2. He notes how points in the paint were not just the big men’s fault

3. He cites that on-ball defense needs to improve (in my view dramatically)

This is a coach that isn't going to be something he is not. If he's going to go down (fired) he'll go down swinging. Whatever happens two to three years from now doesn't seem to be his concern. What he wants to do is lay a foundation before building anything on top of it. Usually this means the fundamentals of the game. It seems that the team’s direction is one of unity and development from the point of view of the head coach.

This may be a little while away but it needs to be discussed because many people are looking at one of a few things in terms of roster movements.

1. Chris Paul/Darren Collison trade movements- While getting help at the wing and big man positions is a must I think people need to understand that player chemistry and roster stability are essentials particularly if there is a new team direction. Given the fact that Paul never really played with DC and Thornton it seems strange to me that people are readily open to the idea that one or the other may go. While these may be outsiders looking in (Monty’s coaching philosophy...hehe) there still seem to be some people who are willing to shake things up just for the sake of it. Particularly with Collison, it's like a problem we have to solve, last time I checked he was a good player. Can't we at least see how he'd play with a healthy Paul?

2. The Draft- I am sure that many will have their views on who we should select at 11 but I for one think this is really a case of best player available. Outside of the two guard positions the Hornets could use help at 3, 4 and 5. I wouldn't mind if we just grab the player we think has the best ability to come in and contribute right away (as well as fitting Monty's philosophy.)

3. Free Agency- Hornets247.com went into big detail on what the Hornets could do in this year's Free Agency. While we aren't going to be big players in the Lebron, Wade, Bosh game (or are we.....) it can be seen that we are more of a player in the market than we think. While I think it's unlikely we'll go out and get a MLE. I think particularly in this year's market there is more opportunity to pick up some solid depth players. Remember, not only is this the year for superstar FA's, but also for a deep pool of talent.

4. The long term future- I think everyone, including me is bitterly concerned of the prospect of losing CP and West in the not so distant future (2 years or so). A friend had the argument that, "Paul will never win in New Orleans; he's going to leave to have a shot at that." The ironic part of it is that he's a Cavs fan and you could taste the bitterness in his tone as Lebron is in that same situation. The argument that players will leave here because they cannot win a championship is absolutely silly. Sure small market teams almost never win the big one, but I find solace in looking at franchises like the Spurs who can pull it together. Paul (and West's) decision to stay or go will not be determined in 2012, but in the seasons leading up to it. If Monty/Bower & co. get together a team that has either made its run or poised to then Paul's (and West's) decision will be that much easier.

Ultimately the Head Coach, Players, Front Office and Owner (and to some extent the fans) all have to be on the same page in their goals, objectives and performance. I like to think of it from a business perspective. If the customer doesn't relate and understand what the business is selling then the execution of a sale is lost. As well, if the Employee isn't involved in the businesses operations then the enterprise will fail.

I'll leave you with this.

"The task at hand is a heavy one, but certainly one I believe we can make strides as a team and head in the right direction."-Monty Williams New Orleans Hornets Head Coach