The Coaching Analysis Express rolls on. Today, we look at an area where New Orleans will need marked improvement: defense.

The Hornets struggled across the board in guarding opponents. David West continued to decline, the Hornets went entire quarters at a time without playing a true center, Chris Paul's injuries dropped him from the level of the NBA's elite, and the team's best defender, arguably, was a rookie.

Before we move on to the coaching candidates, Synergy helps us break down the defense's inadequacies by play-type:

Two quick notes: the totals don't add to 100% since spot-ups (too much noise due to classification error) were left out, and the parentheses next to each Pick and Roll category refers to whether the ball handler passed or kept the ball on the play.

We talked about the Hornets struggles with isolation play earlier this week. The Cliff Notes version: David West was one of the worst iso defenders in the NBA, Emeka Okafor wasn't much better, and together, they comprised a very stoppable force/movable object. Stojakovic and Julian Wright led the team in iso-defense efficiency, and while they deserve some kudos, it's more a sad commentary on the way this team played defense in '09-'10.

New Orleans also ranked in the bottom half of the league in defending every play, save opponent cuts. Once we get into individual player breakdowns, we can paint a clearer picture of who was responsible for what. But for now, it looks like there's blame to pass around among the front court (post-ups, pick and roll defense) and back court (pick and roll ball handler defense and screen defense).

The Hornets have a lot to fix next season. Defensive ability may very well be the number one quality the Hornets look for in their next coach. After the jump, a look at who that might be.

As I mentioned in the coaching pace story yesterday, it's difficult to compare coaches across eras without normalizing with respect to league averages. I took the same approach to normalization: the average defensive efficiency is defined as exactly 100, with a standard deviation of 15. I maintained the defensive efficiency standard that the lower the number, the better the defense.

For reference, the league best Charlotte Bobcats posted a 80.4 adjusted efficiency in '09-'10, the league worst Toronto Raptors posted a 126.6, and the Hornets finished at 112, good for fifth worst in the conference.

And, drumroll, the coaches: 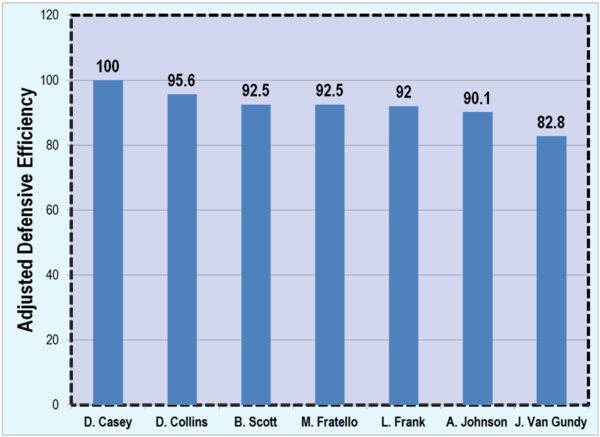 Since lower is better, this chart ostensibly ranks the coaches bad to good, from left to right.

John Hollinger had nothing but good things to say about Casey during his tenure with the Timberwolves. A few excerpts:

"Can anyone remember the last time a coach took a team that was expected to be lottery-bound, had them at .500 and in line for a playoff spot at the halfway point of the season in a very tough conference, and got fired anyway?

"Somebody, anybody, please tell me what this guy did wrong.

"Casey kept the Wolves in the top half of the league in Defensive Efficiency all season despite basically having only three big men in his rotation — Kevin Garnett, the sporadically motivated Mark Blount and rookie Craig Smith, a second-round draft pick.

""We don’t want to be the eighth seed," McHale said when he fired Casey, and man, did he ever get his wish. Newly instated coach Randy Wittman went 12-30 the rest of the way as Minnesota finished well out of the money. The defense that thrived under Casey almost immediately went in the tank, as the Wolves were one of the league’s bottom three teams in defensive efficiency over the final 42 games."

So there's that. Ultimately, Casey's reputation has always been a defensive one (along with his reportedly excellent player development skills).

Both have reputations for designing stingy defenses. Fratello is especially known for his teams' extraordinarily low-scoring games. But adjusted efficiency and yesterday's pace post reveal that both are overrated in the defense department. Their defenses did play a good bit better than the league average, but their perceived values have been severely inflated by low pace.

If the Hornets are indeed going with a defense-at-all-costs mantra, I hope they don't base their decision on Collins' and Fratello's low points allowed/game figures. The team (if any) that hires Fratello and/or Collins will be drastically overpaying for defensive value that's equally rooted in reality and hearsay.

I don't know if Van Gundy is being seriously considered or if he'll even interview. I do know that I keep including him in these analyses because he's an interesting coach to study.

Van Gundy's Knicks squad of 2001 famously went 33 (if memory serves) consecutive games, giving up 100 points or fewer, an NBA record. And his teams' defenses were legitimately good, not "we play 80 possessions per game" good.

His 82.8 adjusted efficiency is easily the lowest among the coaches I looked at, and Van Gundy performed well in both New York and in Houston, without "elite" level defenders at either location. These are all positive signs that Van Gundy could turn around most any defense in the league, right?

Sort of. Any guesses on the identity of Van Gundy's lead defensive assistant in both Houston and New York? Yep, Tom Thibodeau.

Thibodeau joined New York in 1995-1996, the same year as Van Gundy. This was the first season in which he was really credited with designing a defense from the ground up... and it was a good one.

Thibodeau has obviously never been a head coach, but we can splice together data from the years he was a lead defensive assistant (New York in the 90's, Houston in the 00's, and Boston since 2007). In 14 such seasons (7 New York, 4 Houston, 3 Boston), Thibodeau's teams posted an adjusted 80.5 defensive efficiency, better than the teams of any other coach on the chart.

For me, this is another reason to steer clear of Van Gundy; not only did his teams play an exorbitantly slow style of basketball, but it's also questionable as to how much success he's due for his teams' defenses.

Yes, Van Gundy is the flashy choice, the guy that everybody knows about, and the coaching hire that will make the most headlines. Strategically though? It makes little to no sense, given that his teams' offenses were atrocious (more on that tomorrow) and that Thibodeau is probably the far better option if we want the best defensive coach out there.

Ah, there he is again.

I'll be entirely honest: the moment I heard Avery's name being tossed around, I cringed. Nothing personal against the guy, but it struck me as strange that we might hire the same guy we so thoroughly beat into submission in May 2008.

But you know what? By each successive statistical measurement, Johnson looks more and more up to the task. His defenses in Dallas were stout. Most importantly, he executed a ridiculous defensive turnaround with nearly the exact same roster that Don Nelson had in 2004 (a young D. Harris being swapped in for S. Nash).

Dallas in the 2000's, by adjusted defensive efficiency: 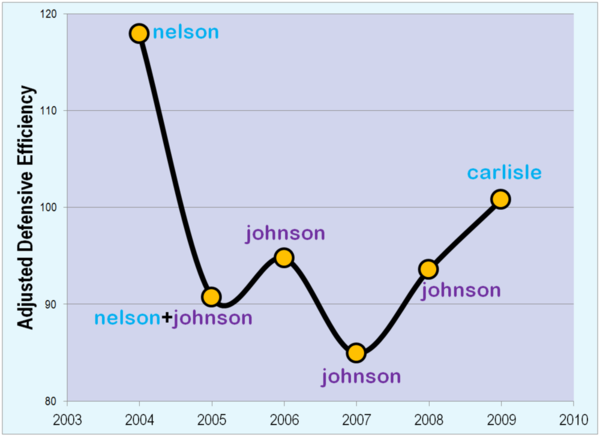 In each of his three plus years, Johnson posted better than league average adjusted defensive efficiencies. In fact, in '06'-'07, Dallas was a top 5 defensive squad. The improvement from Nelson's final year is remarkable, and the fact that Dallas regressed to league average in Rick Carlisle's first year is also highly notable.

Okay, okay, you're still not fully convinced because of roster turnover. I understand. I do. To convince you even further, I went back and calculated the points/possession allowed by Nelson's Mavericks in '04 -'05 and Johnson's Mavericks that same year. Nelson was fired 66 games into the season, leaving Johnson to coach out the year.

Same roster, same players, same everything! Sure, Johnson only coached 16 games. But the drop from 97.4 to 67.9 is equal to two entire standard deviations and is simply impossible to ignore.

I'm warming up to Avery, I really am. You can say that his teams quit on him, but his teams also played very solid defense for him. The perceived values of guys like Fratello and Collins outstrip their true abilities by far, and Jeff Van Gundy may be getting too much credit for the defensive successes of his Knicks and Rockets. For my money, Johnson and Thibodeau are the most proven, accomplished candidates the Hornets are going to find. And as we're learning by the day (or, by the post), the Little General is remarkably well rounded.