I Feel So Isolated..

Share All sharing options for: I Feel So Isolated..

Nobody performed worse in isolation situations on defense- not the Wolves, not the Knickerbockers, not the Warriors. New Orleans was truly in a class of its own.

The Hornets allowed 0.92 points per possession (ppp) when opponents isolated players; the league median on isolation effectiveness was 0.86 ppp. Opponents isolated offensive players more than 10 times a game against us, which honestly strikes me as insufficient, given our struggles against it.

The main culprit? David West allowed an absurd 1.11 ppp, ranking him 346th in the league. 346th! Considering that there are 360 active players in the league and 150-175 "starter" level players, his performance is absolutely atrocious. When Synergy rolls out its video download/highlight reel feature, I'll be sure to put one together for Mr. West. I'll warn you now though- it won't be pretty.

Interestingly, West actually guarded post-ups (specifically, the roller) at league-average rates and the pick-and-roll at plus efficiencies.

Emeka Okafor didn't do DX too many favors in the post, especially not in the way Tyson Chandler helped him out. Okafor ceded 0.94 ppp, a figure that's closer to league average, but still extremely bad (248th in the league).

Rounding out the post crew- and obviously the term "post" was stretched by Bower and the coaching staff this season- were James Posey and Darius Songaila. Surprisingly, both performed rather admirably when placed in isolation situations.

Darius ranked the 80th best isolation defender in the league, ranking him far and away one of the Hornets' best against the iso. Posey came in at 179th, or right around league average. But their positive contributions couldn't offset the 200 isolation situations West and Okafor found themselves in.

A look at the Hornets' defenders against the iso: 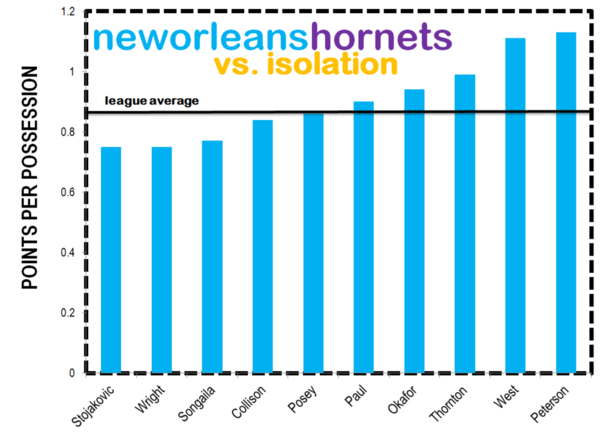 And there you have it (as always, click for larger). Let's be clear right off the bat- sample size issues abound in this chart. Stojakovic and Wright got a combined 137 opportunities vs. the iso while West and Darren Collison had 125 and 130, respectively. Still, I think we can make some reasonable inferences.

Stojakovic was our best iso-defender efficiency-wise, something I have often noted anecdotally and something Ryan at Hornets247 often writes about too. His defining defensive game, in my mind, came a couple years ago against the Cavaliers. I can't recall if it was in New Orleans or in Cleveland, but Peja was assigned LeBron. He'd continually give James two to three steps on the perimeter, daring him to shoot open jumpers. It's surprising how often players like LeBron and Carmelo Anthony take that bait. In one sense, it's extraordinarily easy for them to blow by a guy like Peja, even given that multiple step cushion. But it's one thing to have that option to drive at will and another to actually do it every time. Toss in Peja's ability to contest shots even when playing off of shooters, and his defensive ability seems less silly and more explainable.

He's not (not!) a good defender in the traditional sense of the word. Toss him in a game-on-the-line situation, and the offensive player will get to the rim every time. Count up all the missed opportunities though- throughout the course of a game, a series, a season, count up all the times the offensive player didn't go to the rim because Peja made it easier to shoot, and his value becomes clear.

It's also refreshing to see Julian Wright's numbers, especially given the awful offensive season he just had. Could he become this team's defensive stopper against elite offensive players? I've always thought so, and the numbers certainly say yes. Let's hope his defense can keep him on the floor long enough to see him make some strides forward offensively.

Our most valuable defender against the iso from a total value standpoint? Darren Collison. He played better than league average defense, something you won't find often from rookie guards. He also faced a team high 130 isolation opportunities. In a league full of outstanding points, teams sent their lead guards straight at Collison, night in and night out. And he was up to the task most every time. I can't wait to do Darren Collison's season recap post- a terrific offensive player, an outstanding defensive player, a smart player with his head in the right place. He was certainly one of the team's few bright spots on defense.

Overall, the fact that a 0.92 ppp average against the iso is the league's worst surprises me. In a raw sense, the Hornets were more ineffective against the pick and roll when the roller took the pass (1.11 ppp allowed), against cutters (1.24 ppp allowed), and against post-ups (0.93). But relative to the rest of the league, they ranked 25th, 14th, and 24th in those situations respectively.

Potential explanations include the fact that Synergy Sports classifies many "beat the shot clock" style plays as isolations, resulting in a lower average. Still, we really can't sugarcoat the fact that the Hornets were very, very poor at defending players one-on-one.

I fully expect Chris Paul to drop back below the league average threshold when he returns to full health. New Orleans will have to alter its post defense strategies though, because there's simply no way we can afford West and Okafor being so sieve-like again.