New Orleans and the 2010 Draft Lottery

Share All sharing options for: New Orleans and the 2010 Draft Lottery

For the Hornets, though, the Lottery will likely be drama-free. With the 11th worst record in the NBA, there's little doubt they will receive the 11th pick in the draft. But let's discuss the NBA lottery process a bit first, and then we'll get to the Hornets' odds.

The actual lottery happens behind closed doors, with team representatives and auditors present to ensure fairness throughout the process. The commissioner selects balls out of a weird spinner, and whatever team's logo is on the chosen ball receives the pick. 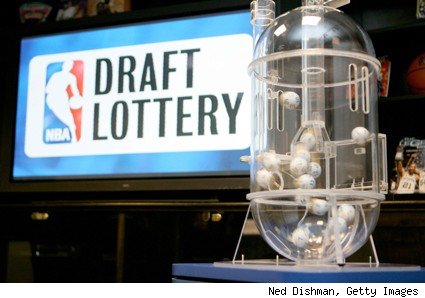 Of course, there are never-ending allegations that the lottery is fixed. The claims stem from the infamous 1985 draft in which seven envelopes were put into a tumbler, and David Stern went straight for an envelope with a bent corner. The envelope belonged to the New York Knicks, who proceeded to draft Patrick Ewing. Allegations of a fixed lottery seem slightly less believable today - even the Clippers have won the lottery.

This year, the Hornets have a 0.8% chance of getting the first pick in the NBA draft. I was prepared to write that stranger things have happened, but in the NBA draft lottery, that's not actually true. The least probably team to ever win the lottery was the Orlando Magic in 1993. With the 11th worst record in the league, they had a 1.52% chance of winning the lottery (in one of its previous iterations).

The point is that it's possible the Hornets get the first pick, but it's very unlikely. The Hornets only have a 2.9% chance of getting a top-three draft pick, but have a 97% chance of receiving the 11th or 12th draft pick. Here it is graphically: 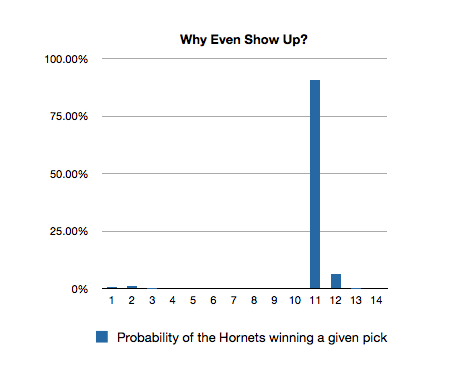 Clearly, anything other than the 11th pick would be remarkable and exciting (unless it's the 12th pick, which the Hornets have a 6.3% chance of getting). But getting the first pick might be a blessing and a curse. John Wall appears to be the consensus number 1 pick, but he wouldn't fit well at all in a backcourt that already has CP3 and Collison. Evan Turner, Derrick Favors, and DeMarcus Cousins are all much better options for the Hornets because they fill needs.
Let's say the Hornets get the first pick - they couldn't possibly take Wall, and everybody else would know that. Evan Turner is clearly the number two pick in the draft and is a fantastic fit with the Hornets. That means the team with the number two pick has no incentive to trade up to get Wall - they know the Hornets won't draft him. That means the Hornets would have to spend first pick money on Evan Turner or risk trading down to third or fourth and probably have to draft Derrick Favors or DeMarcus Cousins.
Obviously, this is a fantastic problem to have - any top 3 draft pick would be a boon for New Orleans. But I still think I'd rather have the second pick than the first.

Figure 2: And it only took seventeen hours!