Offense is at once the simplest and most complex coaching attribute to analyze. Offensive numbers are easy to collect and straightforward to crunch, but it's much harder to quantify instances of over or under control of players or predictability of strategy.

Personally, I've always valued defensive coaching over offensive coaching. The design of offensive sets and associated plays is very important, but to me, offense coaches itself to an extent. Put Chris Paul, Darren Collison, Marcus Thornton, David West, and Emeka Okafor out on the floor, and every coach in the NBA will experience offensive success. Put another way, the marginal offensive value a coach can extract out of a given unit is significantly smaller than the marginal defensive value a coach can extract.

This is something I haven't quantified mathematically, in part because I'm not sure how I'd go about doing it. But I'd love to hear your thoughts: is defensive coaching ability inherently more valuable than offensive coaching in today's game? It's something we can kick around in the comments.

After the jump, our old friends and their historical offenses.

You know the drill. Efficiencies normalized to 100, standard deviation 15, magic. 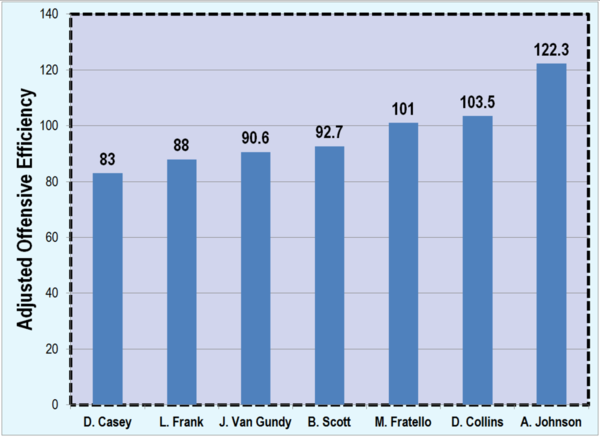 Offense is, by many accounts, the solitary strike against Van Gundy. But oh what a monumentally massive strike it is.

Van Gundy's offenses, as we saw in the earlier post, are very slow. While that would have been acceptable in and of itself, his offenses are also simply putrid. A Van Gundy offense reached league average levels only one time in his eleven year coaching career (Houston '05).

Joe Gerrity at Hornets247 listed Van Gundy as the one coach he'd avoid. I'd have to agree completely (if, for different reasons). Van Gundy is the big name everyone wants to lure back into the coaching ranks. But the more we delve into his career, the stranger it seems. I definitely don't want Van Gundy designing plays for the Collison/Thornton/CP3 back-court. He's the ultimate brand-name coach, and I'm glad New Orleans has yet to interview him.

Fratello and Collins, Casey and Frank

Both the old coaches, notorious for slow pace, have actually helmed reasonably efficient offenses over the years. Obviously, Fratello's and Collins' career adjusted efficiencies of 101 and 103.5 imply that they've hovered right at league average. To be honest though, that's much higher than I was expecting.

Dwane Casey again struggles in his 1.5 seasons with Minnesota, but this time he doesn't have John Hollinger's words to back him up, as he did for his defense. It should be noted yet again, however, that Casey was coaching Minnesota, so it's not like he was wading in talent or anything. The inefficiency of Lawrence Frank's offenses comes as a surprise to me. For whatever reason, I always assumed he carried over the successes of the early 2000's Nets into his tenure. But, as the adjusted offensive and defensive efficiency charts show us, the Nets featured slow, defensive, and poor offensive teams under Frank. I just don't feel like that's the direction the Hornets want to head toward.

And again, AJ comes through with flying colors. There's nothing I can really say that's not encapsulated fully by that chart. Scroll up for a second and come back down, I'll wait.

Yes, Johnson definitely had the most offensively talented teams of any of the coaches on that chart. But he never had the opportunity to deal with inferior players either, and it seems silly to hold that against him. The chart does not definitively say that Avery is much, much better than the other coaches at designing offenses. It does say that the other coaches have overseen either bad (JVG, Frank) or mediocre (the Czar, Collins) offenses, and that given talent, Avery Johnson coached one of the NBA's most successful offenses. The Hornets, without a doubt, will have talented offensive players under contract next season.

If New Orleans is indeed looking for someone with prior head coaching success, the choice is pretty clear at this point. I'll go over player development tomorrow, but this is Avery's race to lose.