Share All sharing options for: Revisiting the Chandler-Okafor Deal

It's hard to believe that the Hornets' '08 playoff run, featuring Tyson Chandler at its center, is only two years old. The last two seasons, with and without Tyson, have relegated that magical postseason run to a hazy memory for me.

Nine months ago (almost exactly to the day), New Orleans dealt Chandler to the Charlotte Bobcats, whose season ended yesterday.  The trade certainly evoked responses from all corners, as would any straight up swap of franchise centers. For the Hornets, it represented a step away from the successes of 2007-2008, but also ensured stability in the short to medium term, with Okafor's longer contract. Chandler's lingering foot issues compounded matters.

At the time, I called the trade a success, not because Okafor was an upgrade over Chandler necessarily, but because the trade offered stability in a time of uncertainty. The Hornets' financial situation was unclear, the salary cap and luxury tax were shrinking, and the nixed Chandler-for-Wilcox trade seemingly precipitated a roster overhaul. The Hornets got back a quality center where many were expecting them to get nothing; that made the trade shrewd, regardless of the players in it.

Fast forward nine months, and it's pretty clear we won the trade from a raw Player A vs. Player B standpoint as well.

Tyson made it onto the court just 51 times this year, barely logging 23 minutes a game while there. The Hornets' pessimism as to Chandler's health seems warranted now, as much as it grated on me last summer. This quote in February from David Arnott (of Rufus on Fire and one of my favorite bloggers on SBN) is more affirming than surprising, but still very telling: "Tyson Chandler can't be expected to be full strength the rest of his career, let alone the rest of this season." Chandler will always be one of my favorite Hornets; the defense and energy he brought during his time here was incredible.

That the Hornets' front office knew a lot more about his injury than they let on must probably be a given at this point. Trades involving such remarkably similar players (Chandler is 4 days older than Okafor) simply don't happen otherwise. A look at each player's career production thus far: 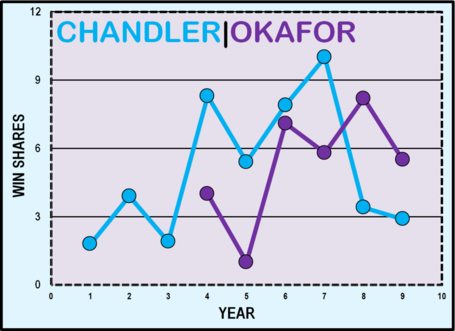 You don't need me to tell you that Chandler's peak year (2008) was a remarkable one. He dominated defensively, and provided a fine offensive contribution as well. This particular graph charts the sum of offensive win shares, quite an accurate representation of offensive value, and defensive win shares, which lag behind some other defensive metrics. Still, the chart paints a pretty accurate picture of the career trajectories of both players.

Emeka Okafor will never reach that peak Chandler year. I'll go on the record now and say it simply will not happen. But he will stay in that 4 to 7 win region for probably the remainder of his contract, given health. He's played in 82 games in three consecutive years now. Could Tyson Chandler rebound next year? Absolutely he could. But the odds are stacked against him.

Chandler surely will not opt out this summer, what with the 12.6 million dollars he's scheduled to make in 2010-2011. Next summer, at age 28, he'll be unlikely to see such money again. You get what you pay for, and for the Hornets, that reward will come in the form of Okafor's statistical consistency.