The statistical revolution in sports has swept across the NBA world in recent years. While it hasn't reached Major League Baseball's level yet- where most teams reportedly hire advanced statistical scouting- the work of many in the APBR community has not gone unnoticed.

Sports economist and statistician David Berri (who we interviewed way back in the day) was kind enough to send along some hardcover copies of his latest book, Stumbling on Wins. Without a doubt, it's one of those books you read cover to cover without putting down, and whether or not you agree with every sentence, it makes you re-evaluate the way you watch any given play in basketball (or really, any other sport). 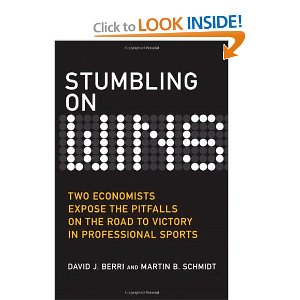 I can't emphasize how accessible it is to the average sports fan either; while everything is statistically grounded, there's nothing too number-y about it.

We'll be running a give-away contest exactly like the one over at Hornets247. Send your answers to the five questions below to atthehive AT gmail.com. Each person that enters the contest (ie, emails) will get one entry into the giveaway drawing. Each correct answer will net two additional entries (thus leading to a maximum of eleven).

On to the questions after the jump!

1. Against which team does Chris Paul average the most points per game in his career?

2. What is the longest winning streak in Charlotte/New Orleans history?

3. What was Emeka Okafor's college GPA?

4. Which of the following Hornets posted the second best rookie season in franchise history, according to Win Shares?

5. Which of the following Hornets' coaches took over the HC position mid-season, a la Jeff Bower in 2009?

The contest will run until April 21st, so get your answers in to atthehive AT gmail.com!