The West Coast Trip: Not That Fun

Share All sharing options for: The West Coast Trip: Not That Fun

So, time to survey the damage.

The Hornets string of games against the Western Conference- they haven't played an East team in nearly a month now- culminated in last week's Pacific swing. And no, it didn't go too well. What went wrong in possibly the final games of Chris Paul's absence?

I've said many times that I anticipated the addition of Tim Floyd to steady the defense. I've also said many times since that such a thing hasn't come close to happening. Wednesday's game at the Warriors was one of the team's worst showings of the year, and the team struggled to defend each of its five road opponents. A quick glance at allowed offensive efficiency on the road trip: 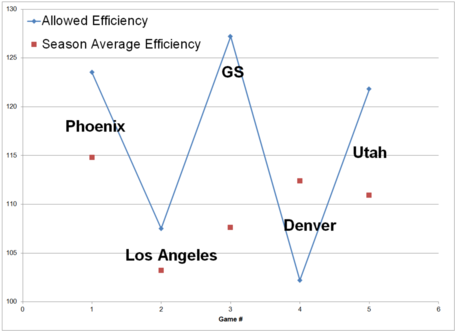 The Hornets allow 109.4 points per 100 possessions, or about 2 points below the NBA average. On this particular trip, they allowed each of their opponents to easily surpass their season averages, excepting Denver. The Nuggets game was especially strange; the Hornets ceded 62 points on 45 possessions in the first half before allowing a ridiculous 31 in 46 possessions in the second half. But both Phoenix and Utah absolutely manhandled the defense, while the Clippers performed a tick above their average (but still sucked).

The main culprit defensively has been allowed floor percentage for the Hornets, all season long. They've been an average defensive rebounding team, average at forcing turnovers (Chris Paul's extended absence pushed them down this year), and very good at avoiding fouling. Unfortunately for the Hornets, this isn't the "avoiding fouling" of the 2007-2008 season; instead, it's of the "give away wide open lay-ups" variety. Once the initial defender is beaten, the help defense rarely rotates over. It happened throughout the road trip.

The team started the road trip in fine form, hanging a ton of points on the defensively inept Suns, Warriors, and Clippers. Unfortunately, the plus-defending Jazz and league average Nuggets gave us numerous problems, mostly in the form of poor shooting and forced turnovers.

The Hornets are annually among the league's best ball control teams and while they haven't been shabby this year (7th overall), Darren Collison has some issues of late, turning it over 25 times over the 5 game stretch. The return of Chris Paul should presumably cut down turnovers from the point position, and lessen Collison's turnover rates as well.

Emeka Okafor picked up 4 double doubles on the trip. It's been a tough first campaign for him, but hopefully he and Paul can finally gel together over these last few games. Chris Paul's coming back, another draft is coming up, and the rookies have been stellar; there's reason to believe that the Warriors game was indeed rock bottom.