In Appreciation of David West

Share All sharing options for: In Appreciation of David West

There was a scary moment for Hornets fans last night (aside from the game itself I mean) when David West rolled his ankle in the first half. Fortunately he was able to return, but it had me thinking about what West means to this team, and I thought we should take a little time to appreciate Mr. West.

For six seasons now, West has been an absolute rock for the Hornets on the offensive end. After a solid rookie season and an injury-limited sophmore season, West's breakout year came in 2005-2006. That campaign saw West average 18.0 points and 7.8 rebounds per 36 minutes on 51.2% shooting. Ever since it's been much of the same, and every season sees West working the pick and pop game to perfection, hitting midrange jumper after midrange jumper and showcasing a continually underrated ability to score in the post and finish around the rim. Prior to this season, his absolute peak seemed to have come in 2007-2008, coinciding with the Hornets peak as a franchise. That season West posted career highs in points, rebounds and blocks per 36 minutes in addition to a career high PER of 19.9 and a career high 8.4 Win Shares. As it turns out, 2007-2008 may not have been the best West had to offer. This season West has been even better. Game after game I've been continually impressed with his offensive brilliance, his improved defense and his on-court leadership.

He's shooting better than ever, posting an excellent True Shooting Percentage of .571 and an Effective Field Goal Percentage of .529. Both are career highs. His PER is at an all-time high of 21.4, which is good for 25th in the league among players who have played at least 100 minutes. His Offensive Rating stands at 112, which ties his previous best and perhaps even more impressively his Defensive Rating is a career best and fifth best on the team 102. West has taken flack for his defense in the past, and indeed some of it was justified. The past two years in particular his weak side defensive efforts have seemed lackluster. As a result, there were many doubts last season over whether or not an Okafor/West frontcourt could ever work defensively. Yet it turns out that with the right coaching, the Okafor/West tandem can work quite well against most teams. West himself has been active and alert defensively. He's also been incredibly vocal. Listen closely and you'll hear West directing traffic, barking directions, and yelling encouragement. Outside of perhaps Chris Paul, West has been by far the most vocal player on the floor for the Hornets this season. 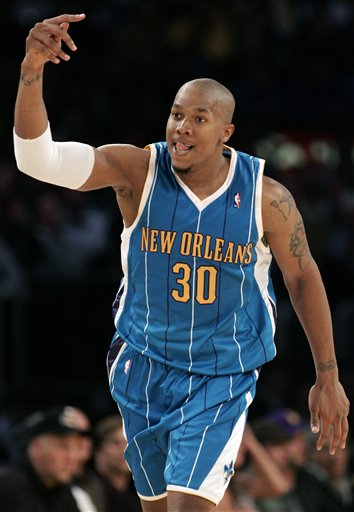 The only real knock against West this season is that his rebounding continues to be mediocre for a power forward. This is true, but last night's game notwithstanding, the Hornets seem to be faring quite well in the rebounding department without West putting up big boarding numbers.

The season is still young, so whether or not West can continue to play at this level remains to be seen. If West can stay healthy, it certainly seems like a good possibility. Regardless, West deserves some appreciation for both his consistency over the years and his ability to evolve. Remember that West can opt out of his contract next summer, so this could actually be West's last season as a Hornet. I hope not, but it's something to keep in mind.

Thus I hereby declare this David West appreciation day! To celebrate, talk about some of your favorite David West moments in the comments section. I'll start: 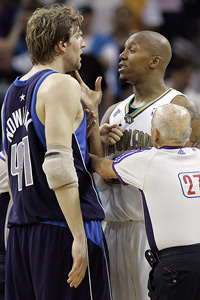