Share All sharing options for: Hornets 93, Hawks 86: Dominant Second Half Sees Off Atlanta

After a subpar 24 minutes saw the team trail by 9 at half, New Orleans used a strong defensive second half to pull away from the Atlanta Hawks.

Lots to like in this game, so let's get right into it.

CP aggressively looked for his shot, using seven straight possessions at one point in the third quarter. He took control on several late-shot clock situations, using his left-right crossover to free himself for a number of jumpers, floaters, and an and-one lay up. Mike Bibby was completely unable to defend Paul; the Hawks' zone defense in the second half also led to a number of mismatches- Joe Johnson, Al Horford, and Josh Smith were all left defending Paul at some point in the final quarter.

Chris Paul ultimately finished off the Hawks by crossing over Al Horford and hitting a fadeaway 19 footer from the right wing.

New Orleans ran the zone a number of times in the first half; in the second, they went to it on virtually every defensive possession. The Hornets have been remarkably successful employing the zone in limited doses this year; seeing it work over a 20+ minute stretch against a plus shooting offensive team was heartening.

Interestingly, the team used David West to show on to the wings on all perimeter screens. This often led to West and a guard (Jack or Paul throughout the second half) going to a pseudo-trap on the perimeter, with Trevor Ariza and Emeka Okafor accounting for either the roll or the weakside backdoor cut. It worked with remarkable consistency. The concept of employing Ariza to deny the passing lanes created by screens (instead of having West sit back) was a novel one, but Ariza performed it well. Again, it was yet another wrinkle in Monty Williams' impressively effective defensive strategy.

Jack didn't shoot particularly well (on a couple of occasions, he had the opportunity to deliver knock-out blow three pointers), but again, he played mistake free basketball. He finished with 10 points on 11 shots, set up five shots for teammates (recording three assists), and didn't record a turnover. He also did a great job in the Hornets' second half zone.

As a result, Monty Williams wisely kept him in the game for the duration of the fourth quarter. Don't look now, but Jack is slowly but surely becoming the player we all thought he'd be.

The Hawks missed 28 shots when Emeka Okafor was on the floor tonight. Of those 28 misses, Okafor grabbed 14. That's obviously good for a 50% defensive rebound rate which is outstanding.

Okafor, who averages a 26.3% rate on the season, played a huge role in limiting Atlanta to an 18.3% total offensive rebound rate. Meanwhile, Okafor (and the Hornets) were no slouches on the offensive end. New Orleans rebounded 12 of its own 43 misses, or 28%. This continues the team's recent stretch of stellar offensive rebounding.

Ariza was one of the few standout defenders when the Hornets played man in the first half. All three of his steals came in one-on-one situations. And as noted above, Ariza played an integral role in the zone defense of the second half. Ariza also finished with 9 defensive rebounds.

Most impressively, his offense was nothing to sneeze at. Despite a couple of late misses, Ariza finished with 12 points on 11 shots, including his first made three point shot (he finished with 2) since the Miami game nearly two weeks ago.

Normally, I don't pay attention to (or care too much) about such things, but the way the bench (or anyone sitting on the bench) supports the players on the floor is fun to watch. Players are constantly talking to each other and the coaching staff, before, after, and during plays. Chris Paul even led a random impromptu huddle at center court after the game: 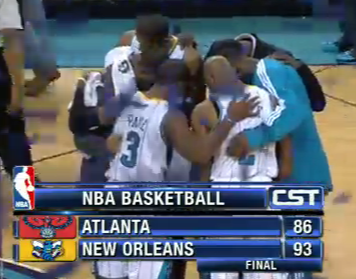