Share All sharing options for: Game 30: Hornets vs. Hawks 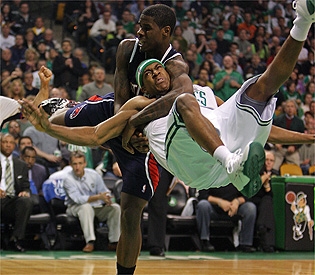 At first glance, Atlanta has had a very similar season to New Orleans. There was the hot start, followed by the cooling off period, all coupled with terrible attendance. The two teams now stand at the same loss record (12) 29 and 31 games in. But the Hawks' style of play is very different.

Atlanta is around a league-average team offensively and defensively. They shoot and take care of the ball decently, but they don't offensively rebound or get to the line. They prevent opponents from shooting well and they don't foul often, but they also don't force turnovers and are an average defensive rebounding team. More than anything, a perusal of the Hawks' numbers this season sheds some more light on our own. Specifically, being great at one thing (as we are) is meaningless if everything else is below par. New Orleans still heads up the conference in defensive efficiency, and yet, we're just as mediocre as the Hawks who don't excel at any one aspect of the game.

Al Horford was always awesome, but this year, he's a special breed of awesome. 123 points per possession on 21.3% usage from a center? Are you kidding? He's also elite defensively. I always scoffed at the Dwight Howard comparisons, but this year at least, they're totally justified.

Finally, Josh Smith is having a career year on the glass (20.4% defensively) as well as passing the ball (19.3% assist rate). So David West should have his hands full.