Share All sharing options for: The Hornets' Offensive Rebounding

As many have pointed out, the Hornets' offensive rebounding seems to have improved tremendously over the past few games. Overall, it appears more due to a shift in offensive strategy than to increased effort or on-court ability.

After the jump, a visual quantification of this improvement on the offensive glass. 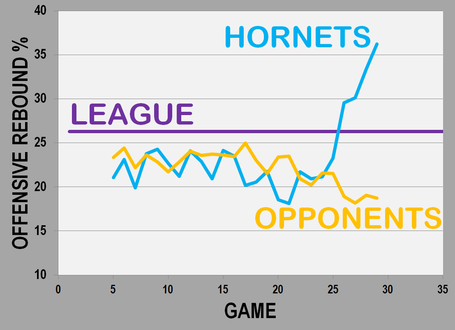 Two things jump out immediately. First, the Hornets have been tremendous on the defensive glass all season long. They've been even more dominant over the last five to ten games, but even before that, they consistently performed far better than the league average. And second, the Hornets' performance on the offensive glass has indeed increased significantly. The spike on the graph over the last five to ten games bears this out.

Through the first 20 games, the team appeared to shy away from the offensive glass to get back on defense and prevent transition opportunities. Over this latest rebounding stretch, the team's defense has remained more or less constant, and the team has had the benefit of improving offensively.

It's clearly been a strategic shift from Monty Williams. As we've seen all year, he's been unafraid to make changes to his overall gameplan; the shift towards offensive rebounding represents a significant change of direction. It's been said many times, but it needs to be said again- Monty Williams' willingness to quickly rethink strategies that haven't worked (benching Thornton, running a non-movement offense with the second unit) has been refreshing. There are still numerous issues to be worked out, but this is definitely a step in the right direction.