Share All sharing options for: Sports, Statistics and Cognitive Bias

The use of advanced statistical analysis to evaluate the NBA is becoming more and more common these days. It's often a big part of the writing done here at At the Hive as well as many other NBA outlets including fan blogs and mainstream sources alike. Nonetheless, despite the increasing spread of APBRmetrics, there are still many who resist this type of analysis. In addition, the mainstream telecasts in which the NBA gets most of its exposure tend to still rely on an unsatisfying mix of experience-based expertise, intuition, cliches and basic per-game type statistics. However, my post today is not going to be an attempt to convert the unconverted, nor will it be a plea for ESPN and the like to start considering pace factor more seriously or talking about PER and Win Shares in their telecasts. That would be great, sure, but instead I simply want to address the topic of the general importance of statistics.

The fact is, if we truly want to understand the game of professional basketball, then objective and in depth statistical analysis is very important and very much needed. Personal experience and intuition are certainly important as well. Their place in the evaluation of basketball is one that will always be necessary. Yet these aspects of analysis face a barrier known as cognitive bias. As defined by Wikipedia, cognitive bias is the human tendency to make systematic errors in judgment, knowledge and reasoning. As Wikipedia goes on to explain, cognitive bias can drastically skew the reliability of anecdotal evidence. Basically, cognitive bias is a part of the very essence of what we often describe as "human weakness." It is a part of everything we do, and it is essentially inescapable. Sports is no exception. There are numerous situations in which cognitive bias comes into play when we try to analyze sport, so let's look at a few examples.

This type of cognitive bias is seen very frequently in sports discussions. Belief bias occurs when people judge an argument's value on the basis of whether or not the argument coincides with their already existing personal beliefs. Just read any of the various Chris Paul vs. Deron Williams arguments that have raged over the years to see what I mean. Do the Deron Williams supporters ever say: "That is sound reasoning. I have changed my mind"? No, of course not. Instead they reject the conclusion immediately, often before they even begin reading the argument. This is because it conflicts with what they already believe and want to continue believing. Now, while I do believe the stats show that the Chris Paul supporters are right in this instance, don't think that being on the right side of an argument precludes the existence of belief bias. The Chris Paul supporters usually behave the same way.

Confirmation bias is somewhat similar to belief bias, but it has to do specifically with how people analyze information.  Confirmation bias is the tendency people have to look at information selectively. Returning to the Chris Paul vs Deron Williams example, it means that on both sides of the argument, people discard information that doesn't support their viewpoint. It means the Deron Williams supporter will ignore the numerous advanced metrics in Chris Paul's favor and focus on head to head matchups and Deron's size advantage and the Chris Paul supporter will do just the opposite. Most people simply want to have their beliefs confirmed and are not interested in critically evaluating their own beliefs, even with something as trivial as basketball. Even those who do their best to avoid confirmation basis will likely find it creeping into their thoughts now and then. I know it's there for me. 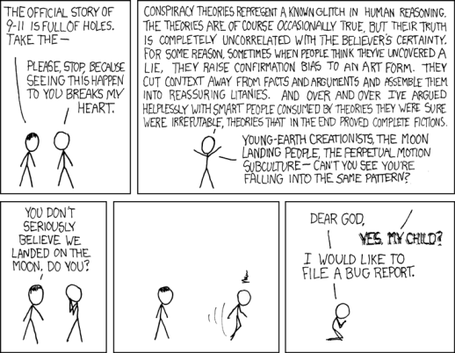 Outcome bias is very, very common among sports fans. Essentially, outcome bias is making a judgment on a decision only when its outcome (whether negative or positive) has become clear and ignoring the quality of that decision at the time it was made. We see this sort of thinking all the time when it comes to trades, free agent signings and draft picks. Greg Oden over Kevin Durant? What a ridiculous decision! How could anyone be that stupid? Oden can't even stay on the floor! Except no one could have predicted Oden's career would be continually interrupted by injuries. At the time the decision was made, it was a fine decision based on the available data. It doesn't become a bad decision simply because the outcome has been negative.

This one is rather amusing. Once people come to understand the role cognitive bias plays in our daily lives, they usually believe that they are less biased than other people. I can tell you that I certainly think this way. Is it because I am truly less biased or am I simply suffering from a bias blind spot?

Cognitive Dissonance (Why We Engage in Cognitive Bias)

The Role of Statistics