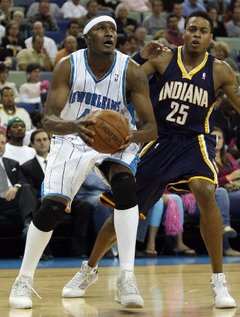 Indiana's record belies its play. At 12-14, they rank 7th in the East, just a game and a half ahead of Philadelphia. But their Pythagorean has them at 13.5-12.5, and the Pacers have had one of the league's more difficult schedules, including the 5th most difficult over their last 10 games.*

*Not that it's even vaguely an excuse for our abysmal play of late, but I will note that New Orleans has played the league's second toughest schedule (by opponent current records) through 27 games.

Overall, Indiana has been largely a defensive team. At 102.9 points allowed per 100 possessions, they have the eighth best defense in the NBA. Their defensive success follows from a strategy very similar to ours- they make opponents miss (4th best rate in the league) and they rebound those misses (9th best mark in the league). They neither force turnovers nor keep away from fouling, so New Orleans needs to stay aggressive tonight while taking care of the basketball.

Trevor Ariza has been really, really bad this season. He's connecting on less than 38% of his field goals. This is compounded by his tendency to fire off too many threes (4 per 36 minutes) at exceptionally poor rates (28%). He's a great rebounder, yes, but he also turns the ball over way too much (14%) compared to how often he's actually asked to do something with the ball. Overall, his 91 Offensive Rating is the second-worst mark in the entire NBA. Through 27 games, he's produced -0.7 win shares. Essentially, throwing an wholly incompetent rando off the street into the Hornet offense and making him stand out of bounds on every play would be more effective offensively than playing Ariza.

But- and you smelled this but coming from a mile away- offense is only half the game. We acquired Ariza for his defense. We certainly didn't expect his offense to be this putrid, but we acquired him for his defense. It's matchups like tonight's where Ariza has to make his mark.

New Orleans native Danny Granger is having an offseason, but throughout his career, he's created 110 points per 100 possessions on 24% usage. He's really, really good at basketball. If Ariza can put the clamps on Granger tonight (and similar elite players in future games), it will be much easier to overlook his severe offensive shortcomings.