I'm sure Charles Dickens never imagined his classic opening line to A Tale of Two Cities would be used to describe professional sports fandom, but there's no question it applies. Fans have two tendencies that make having a relationship with a favorite team a bit of an emotional roller coaster. First, fans often overreact to both wins and losses. Second, they have short-term memories. Events that have happened more recently are often viewed as more important. "What have you done for me lately?" is the operative cliche here.

It should be obvious why this is relevant to the Hornets. After their franchise best start we've seen the Hornets struggle rather badly as of late. This has led many Hornets fans to feel like the Hornets have been exposed and that their is something fundamentally wrong with the team. There may be, but honestly, even the very best teams have their flaws. Regardless, I'm not here to tell you that the Hornets are perfectly fine and there's nothing to worry about. Instead I simply want to give everyone a little historical perspective. All teams, even good teams, have their rough patches. So let's take a look at the 2007-2008 version of the Hornets and their rough patches.

The Hornets of 2007-2008 are the measuring stick for a successful Hornets season, and rightly so. As I'm sure we all remember, they racked up a franchise record 56 wins en route to earning the second seed in the West. They went on to easily dispatch the Dallas Mavericks in the first round of the playoffs before suffering a heartbreaking second round loss against the San Antonio Spurs. Outside of perhaps Game Seven against the Spurs, we all look back quite fondly on that season. Yet that team had its struggles, particularly early. Through the first eighteen games of the 2007-2008 season, the Hornets had a similar record to this season's team. They were 12-6. Pretty impressive right? Sure, but they had recently suffered a nine point home loss to the woeful Minnesota Timberwolves and had struggled to beat the equally woeful Memphis Grizzlies, needing an overtime period to finish the job. They would again go to overtime with the Grizzlies in their next meeting with the team. Other less than inspiring games that month included included a double-digit home loss to the Spurs, a close road loss to the Blazers, and a really tough late-November stretch in which they lost at home to the Magic before suffering consecutive blowouts at the hands of the mediocre Pacers and the always frustrating Jazz.

This certainly wasn't the only rough stretch of the season. Once the New Year came around the Hornets dropped home games to the Wizards and the Warriors. Both teams were admittedly decent that season, but neither was even close to the Hornets level of play. The Wizards would beat the Hornets again just a few days after their first victory and that time they easily dispatched the Hornets 101 to 84. The Hornets never even really competed in that one, as they got outscored 35 to 20 in the second quarter and never recovered. One of the toughest stretches of the season would come as the season was wrapping up. In early April the Hornets were battling the Lakers for the first seed in the West, but they went just 2-4 over their last six games, losing to the Jazz, Kings, Lakers and Mavericks.

There's no reason to just look at the 2007-2008 Hornets though. Think back to the 2002-2003 Hornets. That team won a respectable 47 games and made the playoffs, but they had one miserable stretch where they lost 14 of 20 games. We can also look beyond the Hornets franchise. For instance, take the Lakers so far this season. They got off to a roaring start but have recently dropped three in a row to the Jazz, Pacers and Grizzlies (Edit: Make that four in a row). Or how about last year's Spurs squad? They ultimately went 50-32 and made a decent playoff run, but they lost 5 of their first 10 games of the season.

What does all this mean? Well, it can mean whatever you'd like to make of it. It's really just a reminder that we shouldn't necessarily read a whole lot into this recent stretch of close wins and ugly losses. It has certainly told us some things, but there is simply too much basketball left for us to really have a good feel for who this team is. There will be ugly stretches of basketball and there will be wonderful stretches. We don't know yet in what ratio these stretches will come, but personally, I'm still fairly optimistic. 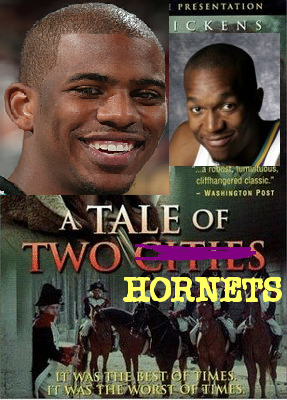 Note: Thanks to Basketball-Reference for being such a great resource.